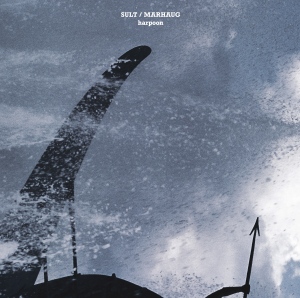 Thanks, perhaps, to Melville’s Moby-Dick, the Harpoon easily elicits images of open sea hunting and a grand existential confrontation with nature made strange by the roar of storms and the inhuman scales of oceans. The improv trio Sult and extreme musician / producer Lasse Marhaug evoke here the thunder of metals twisting and clashing, the heavy groans of materials pushed to their very limits in a series of interactions and activations that seem to reproduce that confrontation by virtue of an all-encompassing stress. As the harpoon rends the flesh of animals and provokes the backlash of nervous systems, the musicians grind their instruments and materials to dust in a process that unleashes a similarly noisy response, a cruelty that oscillates between the impassioned and the neutral, or in other words, the kind of violence that seemingly only nature is capable of.

Listening to Harpoon does feel like standing right in the middle of a rusty ship while a lightning storm rages outside, straining it so much its sounds are akin to an inorganic form of suffering, all creaks and unruly beats extracted from the appearance of invulnerability. It’s not often that I see ships at all, and one of the things that always strikes me is their very mass, their very solidity in the face of something perpetually in movement, their harsh forms simultaneously resisting and appropriating the flows of winds and seas. While human-made, their scale sometimes seem to transcend the frailty of the body, with a power perhaps only rivalled by architecture, like a classical symbol of defiance before the natural course of death. However, when the natural strikes back and fulfils its inevitable promises, the matter that holds that power together crumbles, and to me, it sounds just like Harpoon, like that weapon that so easily pierces the skin of the ocean to unleash storms, storms that easily bend and crush what seems impervious.

There’s a parallel to be made here with the constructs of tradition, perhaps, but suffice it to say that Harpoon presents a soundscape under duress, an anti-ambient that is focused on the violence of the extraction of sounds from pieces of matter, whether they are conceived of as instruments or something else and their firmness is an outgrowth of culture or nature. Listen intently and imagine all the monuments fall, manipulated into noise by forces that, like the ocean at its most enraged, are capable of true cruelty. (David Murrieta)