Stefan Wesolowski ~ Rite of the End 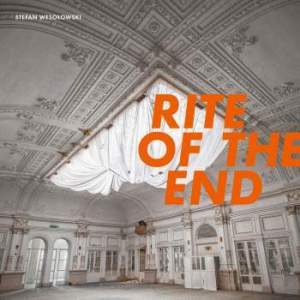 Rite of the End is the seventh edition of Ici d’ailleurs’ ongoing Mind Travels series and the second for Stefan Wesolowski following the reissue of Kompleta.  He’s come a long way since that debut set and even more since Liebestod.  The latest collection holds together beautifully from majestic brass prelude to cathartic electronic finale, and its internal consistency makes it his most fully-realized vision to date.

To understand Wesolowski, one must first understand his spiritual heritage.  As a child, the composer was so connected to his religion that he planned to become a priest.  As an adult, he transferred his faith to music, in particular “a music which permits transcendence, contemplation, wonderment”.  It’s important here to distinguish the difference between faith and religion, as the two are unsteady partners, the second always living in the shadow of the first, never measuring up, nor able to do so by design.  For Wesolowski, music provides the purity he sought in buildings and rites; the rite of the end may as well mean the end of the rite.  In another sense, this album implies a different manner of end: not an apocalypse, but the holy dismantling of an ineffective mindset.

One look at the cover, and one can already intuit that this is spiritual music, concerned not with ceilings but with the light that filters through skyscapes.  Wesolowski continues to seek the divine, albeit through a more direct connection.  We hear this in the deliberate pacing, the yearning of the violins, the harmonic highs ~ but also in the droning lows, the earthly electronics, the tactile immediacy of the interface between heaven and earth.  Ironically, the music was commissioned to accompany a photo shoot.  There’s no indication that this shoot actually took place, but if so, we suspect that it was one of the most emotional shoots of all time.  Better perhaps to indicate that Wesolowski cannot escape his influences, no matter the scenario.

When strings are added to the stately processions of “Frame II”, one imagines a courtly wedding, a cavalcade of priests, a chalice lifted, a cross caressed.  The composer has not left such things behind; he’s simply translated their physical forms into musical forms.  Rite of the End contains many such touches, reminders of a life ruled by tradition.  Yet the outskirts of the album contain its most modern impulses.  As it all falls apart, barreling down a tunnel of crunching distortion, one thinks not of what has been lost but of the necessity of new forms.  As the static gives way to the dynamic, one remarks, but of course.  A god that can be tamed is no god at all.  (Richard Allen)