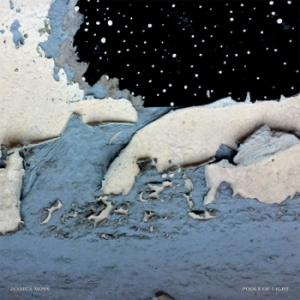 There is a warm solemnity to Pools of Light, like participating in a communal prayer, where hopes are a dream to ward off death, an ultimate end that is nonetheless a welcome fact of life. Inasmuch, at least, as it is the thought of ceasing to be what brings us all together – in the liner notes, Jessica Moss beautifully exclaims “FEELING LOVE IN A MELTING WORLD”. Just like her work as part of the apocalyptically-inclined A Silver Mt. Zion, this album is an interplay of hope for the hopeless and hopelessness for the hopeful, an emotional process in which the sharing of an all-encompassing pain is the relief that provides a basis to keep dreaming, to integrally act in the name of a truthful empathy that wants not to deny suffering but to heal it in communion.

The album is divided into two sections, “Entire Populations” and “Glaciers”. The former is more melodic than the latter, focusing on the immediacy of feeling, the short-duration perspective of a candle lit in the company of loved ones, an elegy for desires still wrapped in the brilliance of possibility. By the time the vocals kick in and create a contrapuntal hymn, the violin’s sound starts to seep back in as a hive of anguish, its tranquil, mournful melodies now underscored by an irresolvable tension: sadness illuminates a path that branches infinitely. “We don’t see entire populations”, the voices chant, positively multiplying a negation in the same tone, like a mental chasm before which only self-reproduction seems suitable, hearing one’s own voice over and over in order to avoid the gasping realization that we’ve already fallen from the cliff that once upon a time made us feel safe. The thing is, all of us have fallen, and therefore we all engage in that commonality, that very humanity that has the capacity to stand before death and smile, not so much in defiance, but in the knowledge that there’s always someone to your side, with whom fear starts to feel like love.

“Glaciers” is more of an ambient experiment, full of aching violin tones and modified voice clips that make it feel as though there were dozens of instruments emitting a single cry of mourning. This is not to say there’s no melody at all, but that it takes a step back into long duration, an extension of its emotional core that makes it sound like it’s deeper than the cry itself. “Glaciers” is less dramatic than “Entire Populations” because of this, but its overall slower pace lends it a gravity that crystallizes sadness into distinct facets of time passing: the imperceptibly rising sea and the slightly hotter days of centuries to come as much as the rushing floods and eyeless storms that in mere days signal the state of our planet’s future. Pools of Light is not the music of hopeful victory (that is the music of progress that happily accompanied us to the present situation), it is the music of a compassionate failure; of the realization that only in each other will we find the care and the fulfillment that our victory over nature never once provided. We’ve failed, but it is in this failure where our love can finally thrive and stop conquering. (David Murrieta)

Available here on May 5.