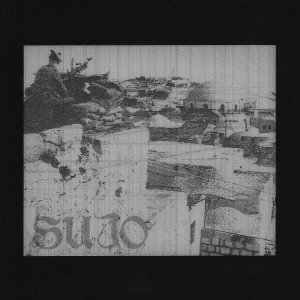 It’s been a while since we reviewed an album by Ryan Huber (Sujo), and the latest one offers a gift to fans.  A Deeper Curse is anchored by the 17-minute title track, formerly available only as a download, bolstered by the presence of five new recordings.  There’s pleasant irony in the fact that we used to yearn for physical recordings to return in digital versions, but that in many cases the opposite is now true.  All hail the tactile!

Sujo’s recordings have always felt as if they have physical weight, and the latest is no exception.  “A Deeper Curse” is murky and clouded, a morass of silt and mud in which drones sink into other drones and pull them down.  The guitars churn slowly, deliberately, creating clouds.  With such weight, one imagines that it would be difficult to lift one’s head.  Imagine trying to stand on Jupiter; without aid, the neck would strain and perhaps even break. The track is thus perfect for those who are carrying heavy metaphorical burdens: untenable relationships, incurable illnesses, depression.  To listen is to find empathy in the oddest of places.  The track’s length is its strength, creating and sustaining a mood that eventually sucks one in.  Not until five minutes remain does the cloud lift momentarily before descending once again, albeit in softer fashion.  The 12th-13th minutes feature pings, like a diving bell.

While the new tracks are strong, they can’t compete with their temporal predecessor, which is wisely sequenced at the end of the set.  Each is the length of a single ~ enough to prompt a reaction, but not enough to sustain one.  This is why the full album works best on a long drive, during which the music becomes a base drone atop which the scenery flies.  “War of the Underground” is the brightest-toned, like the glint of sun from a sword.  “Lehi” travels the furthest distance from start to finish, thinness to density, bleeding into “Maps and Projections”.  But “Phosphorous” is the loveliest piece, the last stop before the darkness descends.  Its proximity to “A Deeper Curse” graces it with great emotional heft.  Whenever we plunge into real darkness, we look back in regret, realizing too late that what we once thought was darkness may have been light.  (Richard Allen)