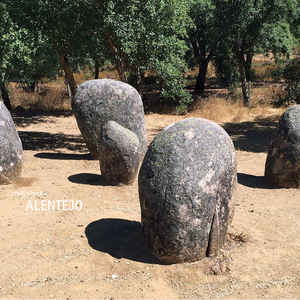 With Alentejo, we welcome back the 3leaves label following a two-year absence.  It’s also a return to recording for Scott Sherk, who defines himself as “a sculptor who often works with sound”.  This quiet release offers a gentle way for the label and artist to reemerge.  The disc is the audio portion of a larger installation in the Castle of Evoramonte, which also includes a color component from Pat Badt.

Alentejo, Portugal is described as “a sparsely populated area of gentle savannah with cork oak and ancient olive trees”.  As such, it lends itself to thoughts of tranquility: to the frantic, a slow pace, and to the overstimulated an opportunity to re-encounter life’s simple pleasures.  The first is a night under the open stars.  As one listens, one imagines an area removed from light pollution, in which the nuances of the sky may be enjoyed.  While we hear mostly crickets and a faraway dog, we think we hear the calling of the cosmos, the music of the spheres.  More musical is “Sheep”, which also features an expanded role for the dog.  The bells are the highlight.  With the sheep so subdued, the encounter comes across more as a herd of clappers.  The wandering, speaker-to-speaker tones (repeated later in “Wind”) produce a feeling of movement, walking the savannah with an improvised stick.  The crickets will receive their spotlight later on as well, their voices manipulated in such a way as to provoke the question, “what sort of mates might these frequencies attract?”

For those immersed in urban environments, the listening experience may come as a shock.  There are still vast, unhurried spaces in the world, spaces in which one might hear only a single conversation in a castle.  Yet even in Alentejo the outside world seeps in, as proven on “Drone”, which magnifies the intruding resonances of civilization.  Offering counterpoint, the album closes with the sound of wind: soft and subtle, but capable of great fury, enough to engulf all other sounds should it so choose.  We boast that we’ve tamed the world, but it’s only an illusion.  (Richard Allen)