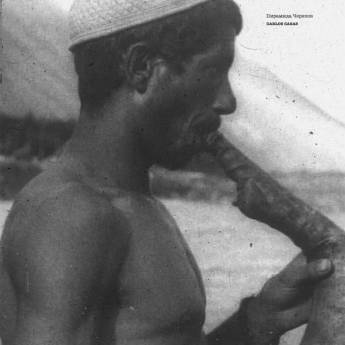 Ruffled by a distant paradise, Pyramid of Skulls is a one-off field recording experiment full of indigenous sounds.

The traditions of the past resurface like an apparition merging into the daylight of today, but the music is also an important document, cataloguing with some anxiety a growing disappearance, a vanishing of soul-resting chants and humble conversations. Only rain prevails.

Inspired by Nikolai Fedorov’s Philosophy of the Common Task and the people of Pamir, Tajikistan, Casas travels to far-away lands; sounds are carved into the obdurate stone of the record, sinking into the walls of its temple. Fedorov believed the Pamir to be the cradle of humanity, a pyramid of skulls pointing to origins and primal secrets. The philosopher’s intention was to begin an expedition to excavate and discover the bones of early men…and now, the listener can take on this mantle of responsibility and continue a trek that leads into the heart of our genesis.

The music undergoes a kind of rebirth, meshing together transparent, liquid-like segments of song with bright field recordings which then float around like splinters of broken cartilage, touching the tips of invisible mountains like passing clouds. Humanity incessantly builds on top of itself; higher and higher without necessarily progressing. Pyramids are incredibly stable shapes but the pile of ivory makes it a fragile and unbalanced thing. The dust of our ancestors lingers in the recycled air.

The packaging itself is that of a dusty, circa 1900 Bartholomew cloth map. Treasures are waiting to be unearthed with each listener being in the possession of a unique map. As such, Pyramid of Skulls takes the listener on a personal journey – each and every listener will experience it differently. Life echoes into the music, because the journey is invaluable and navigation is never a straight forward thing. Strange sounds and colourful timbres introduce themselves at every corner; what once felt abandoned and remote is soon found to be crawling with a human populace as smoky chants sink into percussive potions. But no two paths are ever alike, and so it is with Pyramid of Skulls. Every skull explores a different part of the map, a different element within, and it stays that way until the listener climbs to the top of the pyramid’s apex – the point at which we all converge. (James Catchpole)