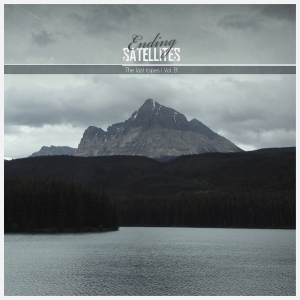 Catchy crossover post-rock seems in short supply these days.  We love the genre and want it to thrive, which is where artists such as Ending Satellites come in ~ able to celebrate the more accessible aspects of post-rock without compromising its principles.  In 2014, a track from Vol. A made our short-lived ACL Singles Chart, and now three years later, the follow-up has appeared.

Damien Defour’s blend of guitar and electronics makes his tracks easily approachable.  The French artist even adds instrumental choruses to his works, a tactic that has worked for some of his predecessors, in particular 65dos.  But a more powerful impact is produced when the density drops out of the mix, if only momentarily, exposing a passage of acoustic beauty.  In the center of songs, we sway, we lift our phones, we chant without words ~ but at the beginning and end of songs, we reflect.  A big moment (such as the crashing center of “1969”) is propped against a pensive passage, creating a bittersweet tone.

One forgets that Ending Satellites is not a band, but a studio creation, the same hands on the piano as on the bass.  The integration of instrumentation is as smooth as can be.  The addition of new elements midway through the album (including something like a filtered harmonica on “Children@seas”) aids the sense of development.  Many artists operate in this arena, but few create such a sense of comfort without toppling into the maudlin.  The only tired element here is the cover image ~ we know that mountains mean post-rock, but wouldn’t something like this be more appropriate?  The same holds true for the photos inside ~ lovely in their own right, but more reflective of nature than the scientific theme.  This being said, whether the images are taken from satellite or from land, if they help us to appreciate our planet, all the better.  The music creates a feeling of warmth, a glow to take the edge from the day.  Tomorrow we may need more, for today, this feels just right.  (Richard Allen)