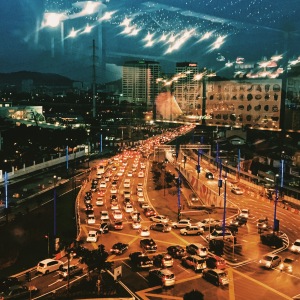 Islip Speedway is a perfect mixtape for the 4th of July celebrations in Andrew Cosentino‘s native New York. On Long Island, being in holiday traffic is akin to being on a speedway: one is either racing or inching along, never seeming to arrive at one’s destination.  Yet while the oval-shaped Islip Speedway is the smallest track to ever host a NASCAR event, the cover photo represents the Sunway Velocity Mall in Kuala Lumpur!

The EP’s retro vibe may bring back memories of the early days of hip-hop – also the final days of the Islip Speedway, whose last laps were run in 1984. Sadly, the new Islip Speedway is a franchise-owned gas station. That classic hip-hop vibe is also on the wane.  But just like Lightning McQueen in Cars 3, Cosentino shows us that there’s still some life in the tank.

The key to the EP’s success is threefold: the vibe, the flow and the choice of samples.  These grooves may help one to reminisce, to relax, or in some cases, to dance.  The EP sounds like summer, and while some of its samples may have had their origins in prior decades, the production value is contemporary.  The artist has come a long way since his 2015 EP Country Western Star, which remained unmastered so he could buy cheese.  This time, the bass is upfront, the drums dynamic, the dialogue distinct.

With no interruptions in the mix, one may retreat into reverie.  Samples of oceans, radio broadcasts, and a person asking directions add to the feeling that one should be playing this in a car.  Being a good researcher, I put this to the test on a 95-degree day: windows open, music blasting, alternately racing and creeping down the highway.  I imagined for a moment that for once, someone might ask, “What’s playing?” instead of shouting, “Turn it down!”

The best moments arrive unexpectedly, as the timbre changes from stuttered sampling to intricate layering.  Harp, violin, even church choir find their way into the mix.  The balance of chopped female song and rapped male phrasing may be the EP’s skin, but the orchestration is its heart.  This is how I wanted the last Avalanches album to sound.  Just like the first Avalanches album, one can highlight key tracks (“Frontier Psychiatrist” there, “KTV” here), but the set works best as a whole.  Cosentino creates his own world, a little bit then, a little bit now, and lives in it.

The album ends with a gentle comedown as the artist pulls off the road, finally arriving at the sea.  Time to eject the music from the dashboard and pop it into the boom box.  (Richard Allen)