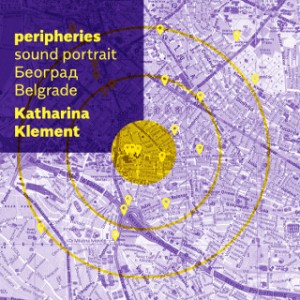 What comes to mind when you think of Belgrade? Katharina Klement went on a nine-week mission to discover the sound of the city, and came away with a multitude of answers.

peripheries plays like a sonic photo album, the images more important than the flow.  While the album begins with a thump, the field recordings soon settle into a sort of rhythm.  As the set progresses, a tapestry is revealed. The overture of the city is heard from a balcony: dogs, sirens, traffic, street music, passers-by.  A discernible hum emerges.  Is this Belgrade?  Can a single chord, a melange of sounds, sum up the city?  Klement answers with an emphatic no. Her explorations reveal jagged edges and clear demarcations, from Tesla’s gorgeously amplified induction motor to the bells of Saint Sava.

An unexpected poignancy visits during “nijemo kolo (mute dance)”, though one must read the liner notes to detect it.  On the surface, the piece sounds like a work of electro-acoustic experimentalism, similar to that of artists on the empreintes DIGITALes label; but the clicks and clacks, the static and snuffings have a deeper meaning.  The piece is dedicated to the silent voices of the city, as the dead speak through candles and the feet of quiet dancers.  In the next piece, the voices of the living push them under, but the impression remains, just like the memory of the beloved Zeleni Vanac restaurant, now replaced by *shudder* McDonald’s.  In an age of multiculturalism, this information prompts the question of city identity.  As distinctive locations and representative sounds are replaced by ubiquitous intruders, the intention that one will feel at home everywhere is replaced by an opposite feeling, a lack of local connection.  Klement’s concentric tours tether the listener in more specific sounds, although the zoo recordings hammer home the point, as zoos capture creatures from different areas and gather them in one place so that people don’t have to travel elsewhere to see them.

The most fascinating and culturally relevant portions of the album arrive as local residents are invited to speak about the sounds of the city.  The first speaks of the “characteristic” sound of the trolley bus, the second of “small sounds” that are lost in the din.  As others speak of the bells or the river using onomatopoeia (“tuk-a-tuk-a-tuk-a-tuk-a-tuk”), another sound begins to sink in: that of accent.  The interviewees speak English, yet can only be from Belgrade: pride and pronunciation combined.

What does Belgrade sound like?  Like kindness and busyness, sound and silence colliding; like crowds and corners, history and commerce vying for space.  In many ways, it may sound like your nearest city; but Klement has underlined its distinctive nature in unmistakable ways.  If one’s mind is a sonic map, Belgrade is now clearly marked in large, colorful font.  (Richard Allen)