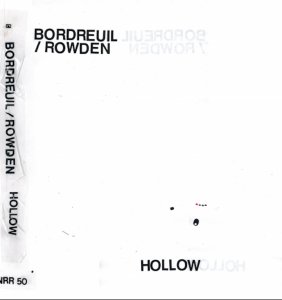 Hollow is basically a noise record made with acoustic instruments, with Leila Bordreuil playing the cello and Zachary Rowden playing the double-bass, which they proceed to exploit thoroughly in the name of sound production. There is no management in this particular factory, which is to say there is little of ‘sound organization’ since their approach leads not to a renewal of relationships to the natural but to a sheer re-creation of it in an artifice that blows the remains of previous order away.

The five pieces of the album are called “No Name”, a significant alternative to ‘untitled’ that firmly roots the sounds upon authorial action, upon decisions taken and concrete gestures made. Recorded without effect pedals, without further edition beyond having several takes of the same tracks, these pieces flow unlike standard free jazz or even free improv sessions, perhaps because even if individual actions are key, they are seemingly not meant to produce an artistic aura but demolish it in the collectively mechanical extraction of sounds from these particular instruments.

Lest we forget, these tools are hollow themselves, so the sounds the musicians produce with them reflect the named namelessness of the tracks in the sense that something as empty as a cello or a double-bass is capable of so much noise, so many textures, so many quiet creaks and violent grindings that there seems to be no end to its potential. Like the factory directed at infinite progress, the duo press and strike their instruments with a fierceness that takes forms as varied as grating noise-scapes and relatively slow and tranquil drones. Even at its most quiet, however, this album is still an all-out aural assault, bursting with atonalities that will not let the ears rest; sometimes the instruments are pummeled into sounding like brass, or the strings are plucked so hard they sound like electronic reverb, and it does feel like standing in the middle of an assembly line, machines humming and working their way through the surroundings, hollowing them in order to unleash the blasts of sounds previously restrained therein.

Because of their background, the artists might appeal to the improv crowd, maybe even the more extreme of the contemporary classical / modern composition fans, but I believe that the true audience here is closer to the noisesters and experimental music people than anyone else. Hollow is an album that belongs right next to your King of Noise and Hanatarash 2, another approach to sonic creation and destruction firmly based upon an industrialized ethos. Give this album a go, and put your ears to work. (David Murrieta)