The Doomed Bird of Providence ~ Burrowed Into The Soft Sky 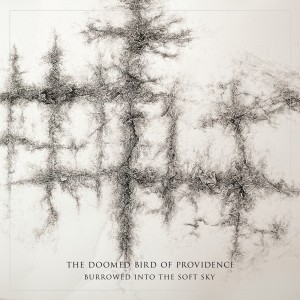 Before 2017, The Doomed Bird of Providence was a vocal band, known for its stories of Australian colonial history.  Leader Mark Kluzek, an Australian living in the U.K., released a series of albums and EPs featuring an ever-changing lineup.  Fair comparisons were made to the early work of iLiKETRAiNS and Murder by Death, two bands who have since shaved their rough edges. Throughout the same period, The Doomed Bird of Providence has allowed its stubble to grow.

We’ve always enjoyed the band’s instrumental passages, which on prior releases have stretched to a quarter-hour or more.  The new album takes it all the way with two twenty-minute, side-long pieces.  It must have taken great restraint for Kluzek not to narrate or sing; for the background, one must turn to the liner notes.  The title track, inspired by Patrick White’s novel Voss, is inspired by a passage in which Aborigines and foreign explorers view a passing comet as an augury of death.  “The Blood Dimmed Tide” takes its title from Yeats but is based on the mass execution of natives by colonists.  From this subject matter a pair of delicate narratives are written, so intricate that they seem more literary than cinematic.  Joining Kluzek in this incarnation are such familiar names as Angela Chan (Glissando, Tomorrow We Sail, FareWell Poetry, Lanterns on the Lake, A-Sun Amissa) and Katie English (Isnaj Dui, The Sly and Unseen), among many others, each of whom contributes an important facet of the work.  Perhaps the most interesting of these is percussionist Ian Hothersall, recording his parts in a church but using the entire building and its contents as instruments.

Is the album good?  Yes, bloody good, and by this we mean that it’s drenched in blood and violence, making an impact through emotion rather than lyric.  The only exception is found at the center of the album in a serene suite of violin and glockenspiel.  After such a regal lull, “The Blood Dimmed Tide” comes on like a flash flood.  When the pounding drums and four-note motif finally relent, it’s only to reload.  The calm after the storm is that of the dead littered about; there’s no dignity, only indignation.  As the living collect the dead, one suspects that they will become the next targets.  The percussion returns like a rattlesnake, a metaphor for the presence of the settlers.  A slow sonic decline leads to silence: the silence of whitewashed history, ravaged ecosystems, vanishing tongues.  Kluzek may no longer live in Australia, and he may no longer sing, but his voice has found a new way to resonate.  (Richard Allen)