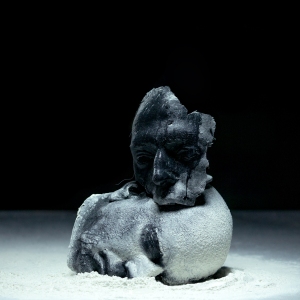 Berlin’s Atonal Festival begins 16 August, showcasing artists such as CoH, Pact Infernal, Demdike Stare and Fis.  But one of the festival’s biggest questions will be, “Who is Belief Defect?”  The new duo is said to be comprised of veteran musicians.  The opening salvo, single “Deliverance”, bears sonic echoes of Nitzer Ebb while sharing a track title with The Mission, sparking speculation that at least one of the members may be older; if not, the influence of the techno-industrial forefathers is clearly heard.  From here we extract the hard beats, distorted vocals, dystopian samples and apocalyptic world view.  But one also detects the influence of grime, along with the harshness of Roly Porter, whose impact will also be felt at the festival.  This is a great way to launch an act, and the ability to keep such a secret in the social media era is a wonder.

There’s a lot of anger in these grooves, which occasionally invite the listener to active engagement: dancing perhaps, or the spraypainting of anti-authority symbols.  Once upon a time, industrial music stood for this sort of thing, before it was co-opted by the masses.  Belief Defect doesn’t seem to care if their fans dance or not; it’s more important to offer these carcasses as emotional catharsis.  The album channels the frustration of a new generation that thought the world was making progress, only to have the rug yanked out from under its feet.  All the old monsters are coming back; nihilism is back in style.  But the music is more than simple rage against the machine.  There’s purpose in these compositions, slow development from beat to melody, from emotion to intellect, from sketch to drawing.  Decadent Yet Depraved may not be a rallying cry, but it’s certainly a re-energizer.

Titles such as “Slipping Away”, “No Future” and “Fake Disciples” reflect the hopelessness of the new generation, which was once felt by the old generation and reflected by artists such as Die Krupps and yelworC.  The military drums of “Slipping Away” recall the dark past of the military complex, while the gentler synths that take their place offer sadness or hope, depending on one’s attitude at the time of play.  It’s hard to hear such precision without thinking of military intervention, especially when the tempo picks up on “No Future”.  But one remembers that even the Berlin Wall came down, and that other walls may one day crumble, even as would-be despots in formerly forward-thinking countries propose newer walls.  The cover recalls the head of Lenin’s statue, broken.  Is there really no future?  The sparse words take one side, the music another.  This is not the music of giving up.

We now arrive at the strange paradox of the electro-industrial scene:  the power of the music replaces the powerlessness of the fans, and becomes its new heartbeat.  The anti-establishment, and often anti-religious nature of the lyrics obscures the fact of its morality.  Here, “Opium Den” is not a celebration of narcotics, but the opposite.  The best political industrial music may seem evil on the surface, but takes up the mantle of the boy who points out that the emperor has no clothes.  The name Belief Defect is a challenge to all assumptions.  Certainty is not the source of righteousness, but its Achilles heel.  The volume of this music may deafen, but its message will not fall on deaf ears. (Richard Allen)