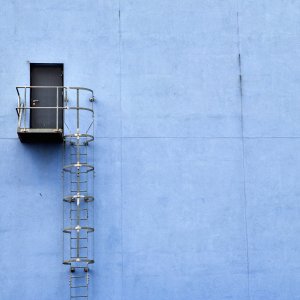 After two black-and-white albums and one black-and-white single, Finland guitar and drums duo NYOS has finally burst into color.  The cool wintry blue artwork of Navigation is a confident metaphor for the music, which continues to surprise.  Thanks to the looping, there’s no way to tell that this is the work of two people.  Electric guitar and bass play off each other while rapid-fire drums sound an urgent alarm.  From opening rocker “Harlem” to closing speedster “Icon”, this album jams out, taking no prisoners in its drive to entertain.  Loud, fast and raucous, Navigation is less like a large vessel trapped in ice than a jet ski at full throttle: a little bit metal, a little bit punk, a little bit math rock, thrown without mercy into a high speed blender.

The melodies are sparse, as the duo overwhelms with sheer power ~ take for example the feedback monsoon of “Navigator”.  Once that wall retreats, there’s room to play with harmonies and time signatures, but the primary impact is visceral.  Metal riffs enter and retreat, peeling back and pausing, allowing for brief, tidy drum hits to set up the next phase.  One can hear elements of progressive rock in the guitar’s response, but there’s no overall language spoken here.  The groove is more important than any specific bar.

The fullness of the album is something new.  For this we credit the mastering of Mandy Parnell, who seems to have injected the music with a steroid syringe.  Whenever the level calls for eleven, it’s there without distortion.  In the proper concert hall, this could shatter the rafters.  While there’s no obvious single (as “Nature” was on the last album), the brevity of the set allows the six tracks to operate as one continuous shot of adrenaline.  Play this album to pump you up for a big game, a board meeting, a surf day.  It’s better than a Monster drink.  But don’t forget to admire the skills of this duo (Tom Brooke  on guitar and Tuomas Kainulainen   on drums), who shove a lot into a small suitcase that expands whenever it’s opened.  (Richard Allen)