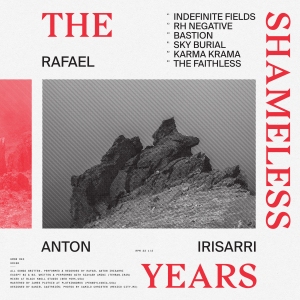 One can rail about the state of society, or one can do something about it.  On The Shameless Years, Rafael Anton Irisarri leads by example.  During a period of stifled expression, he creates; during a time of anti-Muslim sentiment, he invites an Iranian artist to co-compose.  The presence of Siavash Amini, whose album TAR speaks to similar themes, adds deep resonance to the closing diptych.

The title refers to a time of “fake news and alternative facts” ~ a shameless mangling of decency and truth.  In America (with the exception of Native Americans), we are all immigrants or descendants of immigrants.  Yet while the poor and huddled masses are still yearning to breathe free, we’re not so sure we want them anymore.  Irisarri could not possibly have imagined that his LP would be released in the midst of domestic clashes involving Neo Nazis and the Klan, but the timing makes this album all the more relevant.  It’s a statement of sadness, the harmonic drones drenching the set with tears as vast waves of fog wash over the listener like despair.  The music is consistently wrenching and immersive.  But what comes next?  When the blood has been wiped away and the banners blurred, is there any hope at the bottom of the box?

Irisarri says yes, although his statement is more resolute than cheerful.  Over the course of the album, he seems to fight his way through the fog.  These pieces offer a requiem for the disappearing spirit of inclusion.  But as the chords rise in the aptly titled “Bastion”, one hears determination and strength.  It’s as if the composer considered, then rejected, the temptation to give in.  The poignant liner notes explain that he has already outlived his father, and that thoughts of mortality weigh heavily upon his thoughts.  What can one do in the short time one has left?  What kind of legacy might one leave?  Is it enough to make music for the masses, or is there a more elegant path one might trod?

This is where Amini comes in.  Dismay shared is dismay halved.  The artists choose to highlight their commonality rather than their differences.  Their team-up is inspired; not only do the artists share a love for drone, they also share a deep moral center.  These vast, misty banks whisper, I understand, brother.  You are not alone.

The tentative origins of “Faithless” slowly evolve into something holy, defying its title.  As the volume increases, one thinks, this is how a movement starts.  If the current movement was born from prejudice and mistrust, a counter-movement may be prodded by heartbreak and shame.  The final, quiet minute provides an opportunity for reassessment.  When we look back on 2017, we may call it the last of The Shameless Years, the year when we were shocked by how far we’d traveled down the wrong road and resolved to turn back before it was too late.  (Richard Allen)