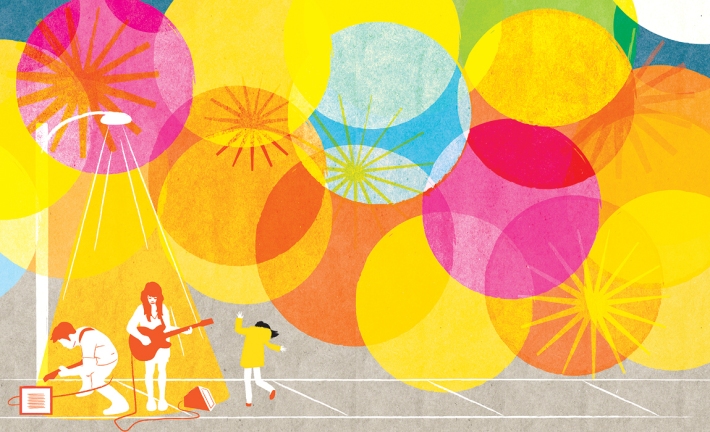 What’s that you say?  You don’t like traditional music?  Look no further ~ these albums offer choices for unique tastes.  From improvisation to curiosities to miasmas of sound, this preview has it covered, with music for every eclectic fan.

Rich’s Pick:  Ben Frost ~ The Centre Cannot Hold (Mute, 29 September)
Things fall apart; the centre cannot hold.  And yet hold it does, as Steve Albini works with Ben Frost to create a series of tracks that threaten to veer out of control, stopping just short of the precipice.  The album follows the EP Threshold of Faith, and includes the title track and EP highlight.  As for the rest, expect periods of savagery offset by moments of intense beauty ~ a collision of minds and ideas that bears dangerous fruit.

Patrick Higgins & Josh Modney offer their take on Renaissance timbres on EVRLY MVSIC, using their guitar and violin in distorted, atypical ways (NNA Tapes, 22 September).  Check out the cover (pictured right) for an incredibly creepy vibe.  Tony Buck (drummer of The Necks) goes Blair Witch in the video for Unearth, from the Room40 album of the same name (1 September).  We’re not sure about the new sound, but it’s definitely unexpected.  But Martin Küchen‘s Lieber Heiland, laß ins stern is the most unsettling work we’ve heard this season.  The labored breathing and bleak atmosphere make it sound more like a gas chamber than the crypt in which it was recorded.  Still, there’s more to the music than fear; it offers a stark commentary on the human condition, a reminder of where we’ve been and never want to revisit (Sofamusic, 8 September).

Harpist, organist and friend of church cleaners Áine O’Dwyer is back with another fascinating document, as Gallarais (pictured right) has already accumulated glowing words from David Toop.  The album sounds secular and holy, focused and distracted, a study in diametrical opposites (MIE, 15 September).  Martina Verhoeven and Dirk Serries‘ Innocent as Virgin Wood is as minimal as they come, a set of improvisations on piano and guitar (Next Wave of Jazz, 1 September).  The album’s dark twin is Quartet & Quintet‘s live Double Vortex, released concurrently by the same label.  The two are yin and yang, oddly complementary.  Touch‘s Tapeworm label is releasing four tapes on 29 September, which will bring them up to magic #100.  Numbered first comes Laura Agnusdei‘s saxophone-laden Night/Lights, followed by Pharaoh Chromium‘s Korg and sax Tokyo Sex Destruction, the live jamming of Damo Suzuki’s Network featuring Château Laut‘s Ausland and finally the celebratory two-hour mixtape A Can of Worms.

Dafna Naftali and Gordon Beeferman‘s Pulsing Dot may be a difficult listen, but there’s little like it on the market.  The blend of piano, voice and electronics presents pure abstraction, an unraveling of form (Clang, 1 September).  Matsuno, Baumgärtner and Graugaard appear on the label 15 September with Crumble, an investigation of disparate timbres, followed by the electronic explorations of Volker Böhm‘s Endless Undo (29 September).  Fresh from an experimental bongo album, Alan Courtis returns with Thomas Dimuzio for an outburst of tortured wires; Monk Style or Scream is released 8 September on Monotype.

Droning and groaning are the hallmarks of another unusual release from Ghedalia Tazartes + Maya Dunietz.  Schulevy Maker documents a live performance at Cafe Oto (Holotone, 25 September).  Clangs and choruses mark the conceptual Two Trains, which remembers the only two trains ever to travel in Iceland.  The project combines modern composition with unusual electronics, and comes from Högni, who has also been a key member of Hjaltalín and GusGus (Erased Tapes, 20 October).  It’s tempting to call SAICOBAB “Psycho Bob”, although that’s probably not the pronunciation.  It’s another wild album from Yo Shimio of Boredoms, along with three friends.  Expect SAB SE PURANI BAB to be anything but boring (Thrill Jockey, 20 October).  The same holds true for the yelping father-daughter combination of Yeah You, who return to Split 15 September with KRUTCH.

“Avant garde drumming” and a progressive spirit permeate Greg Fox‘s The Gradual Progression, a percussion-heavy affair that borders on free jazz (RVNG, 8 September).  Drums Off Chaos‘ Compass is a lost set from Can drummer Jaki Liebezeit and a fine way to say farewell to a legend (Nonplace, 22 September).  The passing of Moebius lends added poignance to Moebius Story Leidecker‘s Familiar.  The electronic backdrop may be accessible, but unusual improvisations take place in the margins (Bureau B, 6 October).  Also heavy on improvisation is the duo of John Wall and Mark Durgen, who make their return 1 September with the edited, re-edited, and ultimately compact Contrapt (Harbinger Sound).  Tape, sax, voice and improvisation all find a home on Rob Mazurek‘s Chimeric Stoned Horn, which is set to debut as the accompaniment to a mythologically themed art exhibition (29 September).

While the field recording and soundscape genre tends to release albums without prior notice, a couple do sneak through once in a blue moon.  One of these is Jonáš Gruska‘s Spevy, which also includes gamelan orchestra on the opening track (LOM, 9 September).  The album combines field recordings with improvisations on found objects.  Three Amazonian Essays seems relatively straightforward at first, until one realizes that Lieven Martens Moana has “remixed” Finis Africae’s classic Amazonia (1990).  The results bridge the gap between centuries (EM, 7 October).  Double bass, electronics and field recordings collide on the upcoming set from Daniel Barbiero and Christiano Bocci.  Non-places creates new fictional worlds that become real in the hearing (Acustronica, 30 September).

Kotä Records is in the midst of preparing a massive 5-cassette set culled from recent live performances of Russian electronic acts.  Selected Works of Experimental Music and Art offers many hours of loving exploration ~ for those who were unable to attend, it’s the next best thing to being there, and a fine way to investigate the Russian underground scene (29 September).  Roger Tellier-Craig (also known as Le Révélateur) returns under his own name for Instantanés, a pair of spacious electronic explorations (6 October), while Opera Mort offers a series of short scores on Film Works (B.A.A.D.M., 1 September), filled with beeps, buried voices and drones.  Finally, the well-received collaborative album Monika Werkstatt has now inspired a set of remixes, due 15 September on Monika Enterprise.