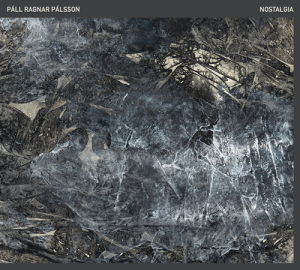 Two orchestras, one ensemble, one quartet and one magnificent album: Nostalgia is one of this year’s boldest sets.  The album announces composer Páll Ragnar Pálsson with a string of exclamation points, and we’re convinced that once people hear his music, his international reputation will be solidified.  While listening, I am reminded of the thrill I had upon first hearing Daniel Bjarnason’s “All Sounds to Silence Come” a decade ago, realizing that I was in the grip of something new.  Perhaps it’s no surprise that Bjarnason participates as the conductor of the Icelandic Symphony Orchestra, but Pálsson has his own distinctive sound.  Ironically, the oldest piece was composed two years after “Silence”, while the newest demonstrates the distance traveled in a short period of time.

To what might one credit the diversity of these four pieces, their visceral impact, the thrill of their extended crescendos?  Perhaps one might look to the early days of the 21st century, when Pálsson played in the rock band Maus.  This experience allowed him to see music from an angle, dissected into components of emotion and intellect.  One might credit his studies in Estonia or his fascination with Icelandic nature and history.  It’s easy to make comparisons between his music and the threatening activity of Katla, the latest volcano to skip stones of fear across Icelandic hearts.  But there’s also great restraint in these compositions, akin to that shown by Valgerður Briem in the mixed media of the cover art.  Look quickly and it’s just a bunch of paint; look closely and see an incredible sense of balance.  This is most apparent on “Náttúruljóð (Nature Poems)” for soprano and string quartet (2009): the elegant performers, armed with bows, performing a pas de deux with the singer’s controlled tones.

But for readers of this site, it’s all about the three instrumental works.  The title track, composed for violin and orchestra, hides its intentions behind the clever intonations of the soloist, but not for long.  Before a minute has passed, the bow has already begun to grow frantic, eager for the company it swiftly receives.  At the two-minute mark the brass enters the fray as the first swarm of strings swirls through the speakers.  Soon the soloist will have to struggle to be heard, flying into a maelstrom of electrons whose friction makes Modest Mussorgsky’s “Night on Bald Mountain” sound tame.  This isn’t the misty-eyed nostalgia of faded photographs, far from it: this is danger dressed in sheep’s clothing.  Once the drums enter (7:38), the composition flirts with cyclone territory; the hairs of the arms stand upright.  A full stop (9:39) introduces a second, more seductive phase of the music, marked by waves of subdued dissonance.  And then ~ ironically, given the title ~ in “Supremacy of Peace”, it explodes.

The opening minute comes as a shock; this sounds like war.  As the musicians switch seats, the Icelandic Symphony Orchestra ceding ground to the Talinn Chamber Orchestra, one senses a bit of bullying:  my seat, give way.  At this point, one comes to admire the sequencing of the album, as every bit of violence intimated by “Nostalgia” finds its outlet.  At 4:00, a strange trick of the ear makes the orchestra sound as if it has been backward-masked, receding and then resurging.  If this is peace, one thinks, an eye for an eye makes the whole world blind.  The late tendrils are like smoke wafting over a battlefield, their very descent a protest.

Now to the newest piece, “Spiegeltunnel” (heard live below).  The percussive aspects are now upfront, the near silent passages extended.  Pálsson plays with expectations, but he’s earned that right.  We’re already willing ~ in fact, curious ~ to hear where he will go.  Early glissandos fall and rise, their weight determined by the depth and height of notes.  Harmonic counter-clusters begin to gather strength.  As performed by the SKARK Ensemble, this 20-minute piece is the culmination of all that has come before, a composer knitting together fire and storm, alarm and aftermath.  The swarm that leaves its hive at the end of the eighth minute provides the largest thrill in an album filled with thrills, and once those bees are out, there’s no getting them back in.  The same holds true for this composer and this album; we’re in the presence of a major talent whose works are already strong enough to endure.  (Richard Allen)