Various Artists ~ The Folklore of Plants Vol. I 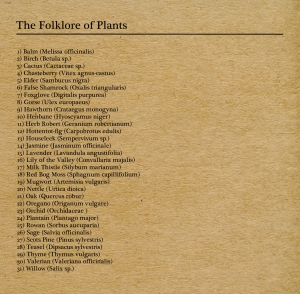 Another expansive (but not expensive) project from Folklore Tapes, The Folklore of Plants is a tiny treasure trove.  In addition to the LP, the contents include two pamphlets, a postcard, a packet of seeds, and a link to a short 16mm film.  The package is filled with historical value, medical advice, sonic beauty and who knows ~ perhaps flowers, perhaps a tree.  It’s a perfect way to celebrate the fall.

Reading the pamphlets and watching the film, one is struck by the things we have forgotten ~ the benefits of walking, of looking, of hearing.  The symbolism of the plant world is celebrated, from the specific final flora chosen by Ophelia to the lightning-drawing properties of the oak to the amusing “f**k off” message of basil.  We knew that opium represented slowness, but not the heartbroken pose of the daffodil, nor the antidepressant qualities of lavender. 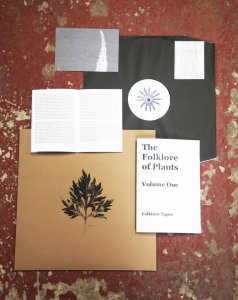 The music is incredibly varied, with 31 songs in 49 minutes reminding us of Virgin Babylon’s One Minute Older.  The styles include ambience, drone, folk, spoken word and abrasion, but each track passes swiftly like an autumn bloom.  The first time through, it’s fun to read the artists’ descriptions while taking in the tracks.  Here one learns that birch is often used as a may pole (The Silver Funz); that false shamrocks fold their leaves at night (James Green); that henbane once added a “psychedelic kick” to beer (Sam McLoughlin).  Joshua Bonnetta samples various cacti to create his piece; Paper Dollhouse uses field recordings and soft drones to replicate the mystical properties of Gorse; Modern Studies allows its score to be dictated by pieces of Scots Pine Bark.  For each track that goes off the rails (the punkish “Herb Robert”, the frankly bizarre “Jasmine”), there’s a soft balance (the gorgeous collage of Mark Stark’s “Lavender”, Delphine Dora’s angelic “Lily of the Valley”).

Perhaps the best pairing on the album is Magpahi’s “Mugwort” followed by Zoe Naylor’s “Nettle”.  The first track is one of the album’s spookiest, a folk song backed by a dark hum, intimating the dangerous allure of folklore by exposing its dark side.  The second is an explanation of the properties of nettle ~ field recordings and a friendly, admiring voice.  Together, they represent the appeal of Folklore Tapes: witches and demons and dark tales balanced by nature and beauty and grace.  As long as neither side overwhelms the other, their truce keeps the world together.  We’re especially happy to see the words, “Vol. I” and to know that more installments are to come.  (Richard Allen)