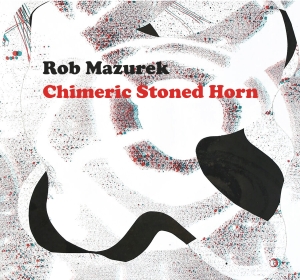 Chimeric Stoned Horn is Rob Mazurek’s latest solo album after a slew of appearances and collaborations in various other projects since 2015’s Vortice of the Faun, in which the virtuoso cornetist ventured out to make his mark in the field of noise. Against Vortice’s rawer, power-drill textures, however, Chimeric is a much subtler affair, closer to EAI than to noise, but no less energetic. Where the former loudly blasted sounds into existence, the latter crafts them, builds them up and intertwines them amongst themselves into a tapestry of myriad harmonic colors. The abstract elements complement and are directly complemented by the concrete ones, creating an aurally engaging experience in which, for example, the transitions from short piccolo trumpet riffs into electronic hisses feels not only natural but inevitable.

The album is composed of mostly short tracks (from 11 seconds to 5 minutes) and an 8-minute introduction that sets the tone: “Arrival From a Distance” quietly and serenely articulates a noisy electronic soundscape upon which the trumpet comes to essay its own deconstructive potential, rising from feedback and submerging into it seamlessly time and again. There’s an almost psychedelic quality to this meandering, at least when it comes to the melding of sounds and the experience of a continuity that nevertheless constantly changes shape. When Mazurek’s wordless voice comes into play, a pre-verbal expression with no immediate emotional associations, the music is fully pushed into a surreal territory in which nothing is fixed, and everything is vitally immediate, to an almost vertiginous point.

Nonetheless, this vertigo is reined back by reflective, repetitive moments such as “Hollers Charged”, right in the middle of the album, in which the trumpet reestablishes a horizon of aural safety. It is immediately destroyed by the following tracks, but a kind of ritualistic process has been established by that point, a psychedelic opposition between stability and malleability, between the player and the sounds he is producing, integrating one into the other as a powerful, noisy renovation of both the abstract (the punishing electronic cracks and growls) and the concrete (the trumpet, the sparse voice sections). In tracks like “Planets Lower Crust” the noise is the trumpet, and there are even a few parts in which the feedback is timed exactly with the moments in which Mazurek could breathe; regardless of whether that sound is the electronic interpretation of his breath or not matters little – the fluidity is absolute, the tapestry complete.

Chimeric Stoned Horn is much more focused than his previous solo venture, it is much more powerful and engaging, the sounds and the textures much more interesting. Mazurek is commonly associated with jazz circles, but if he keeps moving in this direction it’ll be sooner rather than later when we start referring to him as being part of the wider noise scene, perhaps even the drone one. I can only dream of the Aaron Dilloway or Jason Lescalleet collaborations… (David Murrieta)