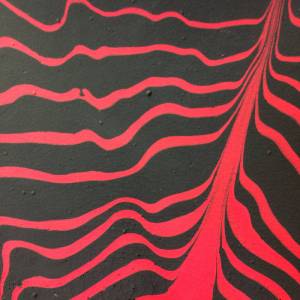 Geek culture is now mainstream culture, to the joy of those once on the periphery.  It’s been a while since we last heard from Peter Hamlin (The Holocene).  Hamlin is unlike others in the genre; he’s now a father of two, and works on his horror loops (now with beats!) in the basement long after the children have gone to bed.  We imagine him as a mad sonic scientist, but not too mad ~ more like a meticulous fan.  (Many of my adult friends are required to wait for their families to fall asleep before reading their comic books or watching The Walking Dead, or ~ irony alert ~ “their wives will kill them.”)

So now we have Dead:Unearthed, a splice and dice of horror films, sound effects, old records and tape loops, with the occasional sinister bird, vintage commercial or dramatic dialogue breaking through the mix.  It’s not really scary, but more like an homage, the once-frightening synth samples now seeming quaint in comparison to later film scores and ~ let’s face it ~ real life.  While the original tapes were sent in “blood-spritzed mailers”, they also contained pieces of tape and instructions on how to use them.  Contrast this with the truly terrifying bits of mail we’ve read about in recent years, such as anthrax and package bombs.  Even the “screamyourselfawake” track is looped and backed by swift, nearly happy drums.

Dead:Unearthed looks scary, but sounds fun.  This is the central appeal of such an effort: the horrifying tamed, the terrifying tethered, the adult looking back and laughing, “I can’t believe that scared me as a kid!”  The only misstep is the use of the word “evil” in the press release.  This isn’t evil; one might even make the case that it represents the opposite, reflecting the heart of the modern Halloween.  When one hits the slow song and surf of “Midnight Saturday”, the charm of the tape becomes apparent: the jolt is saved for “39Nasty”, which sounds like a TV snapping on of its own accord.

By the end of the tape, the timbres have grown a bit darker, especially the static drones of “Burial Ground.”  But then again, there is contrast ~ the lighter synths of the ensuing track sweep away the dread like the wind through an open window dispelling the must.  The VHS sample may refer to a seance, but the music is upbeat enough for dancing.  Closer “We All Reach the End” is enhanced by the incredulous cry, “You’re dead, you’re dead, the dead can’t live again!”  But the tone is that of the old EC comics, in which spirits came back only to visit revenge on deserving scoundrels.  Hamlin captures the allure of a widely misunderstood era, and makes it his own.  Dead:Unearthed is a welcome return for a father who stays up late in order to tame the creatures of the night.  (Richard Allen)