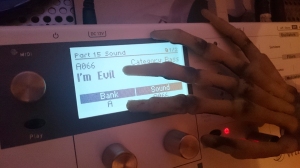 Out latest mix comes from Radoslav Morovani compiled with this special season in mind. Happy Halloween!

I craft & edit sound for commercial enterprise such as games, sound therapy, marketing.

From an early age influences included Hammer films, giallo cinema, Lovecraft, Poe, Peter Straub. After completing a sound tech apprenticeship at a studio in Dublin I fell back into contract electronics. I Developed my existing knowledge by acquiring the right books, learned, listened, developed a strategy & equipped myself to harness my imagination. Some years of DJing at parties & clubs helped to augment my practical production insight & galvanize my skills. In time I found that a love of movies, music & production technology had run full circle. So after exploring different sounds while recording for Sect Records & Edify Recordings, under different monikers, a dark instinct reached out from my past, redirecting my skills to craft a dark sound.

Tell us about the mix.

There is no magic if a sorcerer shares all their secrets. But I can say that a selection of digital & analogue sources are summed from an analogue desk & EQ before digital mix down & capture.

‘I’m a storyteller & my stories must be told’… I attempt to apply a narrative aesthetic to mixing as I do composing. All material used in the mix has been selected to create a dark, cohesive, dreamlike experience referencing snapshots of my influences. I felt duty bound to include some Marcus Fjellström RiP out of respect to his memory & his immense musical talent. The tribal vibe of The Creatures’ sound happened to fit but I have a lifelong admiration for Siouxsie & the Banshees. I also included work of new acquaintances, Sana Obruent, Sim Hutchins as I dig their sound & they fitted this brief. The version of Marian I included is among my favorite Sisters’ [of Mercy] tracks & possibly the best rendition of that song, timeless as it is haunting. But everything I’ve used has its significance.

Although based in EU, the UK is a second home where I collaborate with @filigreenight to organise & perform at left field electronic music events alongside fellow travelers, Buttonmoon, Cjmann, EyeVJ, Acid Iron Kid. I recently compiled a promotional mix for the UK screening of Cosmotropia De Xam’s Phantasmagoria film, which was organised by The Filigree Society in collaboration with Phantasma Disques.
Anything coming up on the horizon for you that you want to plug? New music, shows, etc?
Alongside occupational commitments I’m currently collaborating on fresh material with an established producer within the witch-house community. I’m also discussing plans for a potential release of material with an Italian label.

Hot Springs In The Snow – The Creatures