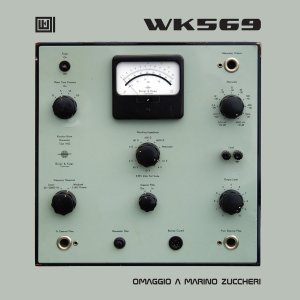 Onga and Boring Machines deliver another unexpected gem with WK569’s Omaggio a Marino Zuccheri, an homage to the Italian godfather of electronic music studios from a trio of contemporary artists and technicians.

Marino Zuccheri is certainly worthy of such an homage, and his influence is felt around the world even if his name is not as well known as it should be. If his name rings a bell for our readers it is likely due to the marvelous Parete 1967, released for the first time a decade ago by the essential Italian label Die Schachtel. There is much to be said about that work, produced to accompany a visual projection by the painter Emilio Vedova inside the Italian Pavilion at Expo 67 in Montreal, with its unexpected transformations and juxtaposition of swelling noise, scraping metal, and tape loop drones. And I’ll tell that story in detail some other time. But Zuccheri considered himself to be more scientist than artist, a technician rather than a composer. Despite his humble insistence of this fact, Parete 1967  demonstrates just how blurred these categories become in the realm of studio production and electronic music. And it is precisely this blurring of categories combined with his technical brilliance and creative resourcefulness that has made the man such an important influence on the development of electronic music. This is particularly true in Italy, a country  who despite producing such important contemporary art and music generally suffers from a lack of state support and reduced international profile.

Early electronic music studios all over the world tended to be state funded, which was necessary to cultivate non-commercial work but also restricted access to a particular ideological or aesthetic viewpoint. Remember, in those years even a bank of oscillators, a mixing console, and some tape players were far too expensive for all but the richest individuals, and so some form of institutional support was necessary. Though such studios were utilized by composers of contemporary art music interested in the potential of electronics, many of these studios originated within radio or television broadcast studios and hence had to meet their needs for the production of sound effects, such as the BBC’s famous Radiophonic Workshop. In Paris the Groupe de Recherches Musicales (GRM) pursued musique concrète, often leaving no room for composers like Eliane Radigue who did not fall within their orthodoxy. Meanwhile the Studio für Elektronische Musik (WDR) in Cologne resolutely pursued pure electronic music, stemming from an interest in audio synthesis dating back to before the 1920s. The United States had the Columbia-Princeton Electronic Music Center, which was predictably academic in scope given its university setting. A bit later the more iconoclastic bricoleurs on the west coast founded the San Francisco Tape Music Center. Despite being a very different institutional setting, this last studio seems most kindred in spirit to an Italian aesthetic, which is resourceful in the face of constraints and willing to find hybrid means to reach their own particular ends.

Italy had the studio di fonologia della RAI di Milano from 1955 until it’s tragic and unceremonious closure in 1983, after decades of declining support. Indeed, the RAI (Italian Broadcasting Company) closed the studio when Zuccheri retired. During his tenure he was host to such luminaries as Stockhausen, Pousseur, and Boulez, as well as John Cage, who recorded his “Fontana Mix” there. Of course it was also home to some of Italy’s most important post-war composers, namely Luciano Berio, Luigi Nono and Bruno Maderna.

The great philosopher (and later novelist) Umberto Eco, who collaborated with Berio on his Omaggio a Joyce asked, “Who is one of the most performed contemporary electronic composer in the world?”

Marino Zuccheri, the sound engineer of the RAI Studio di Fonologia in Milan. Illustrious figures in the history of contemporary music arrived there with State grants; but after many months, they still couldn’t figure out how to handle the machines. Then Marino (who, working with Berio and Maderna, had become a wizard), started mixing tapes and producing electronic sounds: that is why some of the compositions now being performed all over the world are by Marino Zuccheri.

Zuccheri was the studio’s in-house technician and a master of sound at a time when organising sound was not yet accorded the same status as composing music as such. He demonstrated the importance a “technician” brings to the creative process, setting the stage for later generations working in this field. Starting out with just nine oscillators and tape, Zuccheri was able to manifest rich new sound worlds through resourceful exploration. Italian electroacoustic music up until this point was mostly confined to these highbrow practitioners, however the ability to be expressive and innovative working within one’s resources continues to be an important aspect of anything one might call an Italian Aesthetic. The trio of WK569 fits nicely into this narrative, and given the backgrounds of its members, seems a fitting crew to show their respects.

Founded in 2009 in the StudioWK in the small town of Esine, near Brescia in the north of Italy, this group has very few credits to their name.  According to Discogs, which is surely incomplete, their recorded appearances as a group prior to Omaggio are rather limited. Their composition “Exurdans eclipsis 7D8” in memory of the late composer Fausto Romitelli was awarded the “Sincronie 2011” award, and included in a 2012 CD collecting remixes of his work. They were also credited in 2016 with contributing “background sounds manipulation” on a Dark Side of the Moon inspired electronic jazz album. WK569 have performed live in various settings, including for the Triennale of Milan and and their as individuals have various credits as technicians, engineers, programmers, film composers, and musicians.

This 12” EP honors the work of Marino Zuccheri, but it doesn’t try to mimic him.  The trio draw inspiration from his legacy and spirit, and do not attempt to recreate his sound or utilize the same technologies that Zuccheri worked with.  Omaggio a Zuccheri was created through a process of generative algorithms sending MIDI data to various hardware and sampler (VST, VSTI, Yamaha TX816, Kurzweil R2500). Federico Troncatti has worked as a composer and electronic researcher working with MIDI, and as a studio assistant at the AGON electronic music studio in Milan.  Ezio Martinazzi is a musician and programmer whose expertise lies with generative algorithms and hardware interfacing. And lastly Pier Enrico Villa is an experience sound engineer and producer who handles the signal processing and production. The resulting composition sounds almost out of time, sonically not much like the tape music produced for those formalist composers, but also unlike most modern computer or electronic music. The love for electronic sounds, for the new and unpredictable, is very much palpable however.  Omaggio a Zuccheri is a fitting tribute to an underappreciated yet highly influential figure in Italian electronic music.(Joseph Sannicandro)

(And while you’re here, why not revisit this mix Onga put together for us in honor of Boring Machine’s 10th anniversary in 2016.)