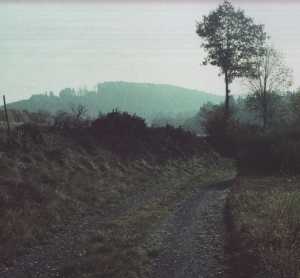 A new year begins with questions, wishes and hope.  Will there be peace on earth?  Will the world turn back from the precipice?  At the very least, will this year be better than the last?  Searching, if not for answers, at least for consolation, Ká (Karel Kolařík) returned to the Bohemian forest to gather his strength.  The last set we reviewed honored the forest as the birthplace of fairy tales; the new set has weightier concerns.

Living under the threat of war, Ká is of two minds, as reflected in the title.  The specter always looms, yet in the meantime there can still be friendly greetings.  And this is a friendly album, visited by some old friends from the prior recording – farm animals and a persistent dog.  The cover offers an invitation, as a path stretches into something dark and mysterious, but not necessarily frightening, a possible metaphor for the artist’s mindset.  Perhaps the forest will bring perspective, the birds tweeting as they always do, the streams flowing, the winds blowing, nary a care for humans and their politics.  While our choices will affect them, the other sentient beings don’t spend their time on anxiety, not when there is food to be found and there are mates to be met.  There is even time to greet the morning with something that to to our anthropomorphizing minds sounds like gratitude.  We can learn a lot from nature’s other inhabitants, much of which we once learned but have since put aside: sufficient unto the day is the evil thereof.

And so, the wind, the droplets from the leaves, the cicadas and frogs sing their songs, hammering out this friendly greeting, which Ká then captures and shares.  Given the choice, he prefers this to war and rumors of wars, and so do we.  Not everyone can get to a peaceful forest, but everyone can imagine one.  The interaction between species, the fragile coexistence is encouraging; despite the presence of the food chain, there is balance.  If creatures of lesser intelligence can live in such harmony, we can too.  If they can sing, despite the fact that they might die any minute, then so can we.  We might even turn back from destruction.  Calling the region “Pre-War Bohemia” need not be prophetic.  In the words of Sheenagh Pugh, Sometimes things don’t go, after all, from bad to worse … A people sometimes will step back from war.  And sometimes, even in the shadow of looming conflict, humans will prioritize art over aggression.  This is the ethos of the entire Recordings on the Road collective, who may embrace life more than most because they know more than most how fragile it can be.  (Richard Allen)