ΠΑΝΘΕΟΝ ~ A Book of Memories 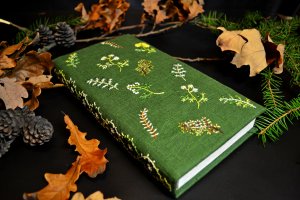 St. Petersburg’s ΠΑΝΘΕΟΝ label has been responsible for some lovely packaging over the years, and A Book of Memories is yet another charmer.  The embroidered box (designed by Mila Berestovaya & Tim Six) contains cassettes from Sunmoonstar, YlangYlang and Jum-Jum, together forming a Russian tapestry as warm and welcoming as a fire.  Each is also available separately in download or tape form.  The set draws on folklore, yet couches the presentation in modern skins; each has a backstory that sounds like a page from a wondrous collection of fairy tales. 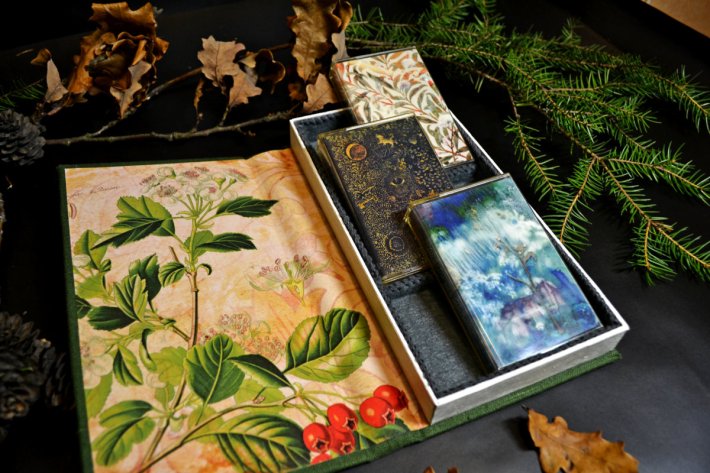 Open the box, and the stories begin to unfold.  Sunmoonstar‘s Картины (Paintings) tells of “an old book that was itself a story,” its pages turned by “the crystal clear winter air.”  The tones fall as gently as snow, twinkling like frost on “озеро (lake)”.  This gentle album honors the winter solstice, marking the longest day with the sweetest sounds: on “лайка (chamomile)” pausing the chimes time and time again, as if drifting in and out of dreams.  Natasha Home’s mysterious artwork only adds to the allure, its intricate figures drifting in design ~ a puppy, a moon, a fossil, a key ~ a box within a box.

YlangYlang‘s A Certain Distance speaks to the rush of modern life, so fast that we miss the miracles: “The air itself was singing something, humming along with crackle of the firewood. But no one noticed it.”  The album imagines “the pines and the moon telling stories to each other,” translating them into reverberant drones.  The artwork is a hide-and-seek, with leaves that look like dolphins and birds, or vice versa.  Catherine Debard’s titles speak of distance and connotation, the hidden meanings of things.  Those who take the time to seek may regard such wonders not as mysteries, but as blessings lying in the open.  As “The Ditherers” turns from drone to piano, clarity is achieved, and never again flees.  Not even the wind of the title track can drown its impact as it finds its spot in the book.

A prayer chime marks the beginning of Jum-Jum‘s Orchard, a debut release dedicated to the artist’s grandmother.  Sasha Isaeva finds meaning not only in generations, but in cycles: “every water drop believes in its chance to become a snowflake.”  She connects the stories of her ancestors to the glories of the earth, with its “long winter nights of dreams and memories.”  As “Вдох (Breath)” winds down, the chimes thicken like a flurry, turning from abstraction to melody in “Земляника (Strawberries).”  The frozen ground remembers berries like an aging relative recalls childhood.  When the birds start to sing, it’s unclear whether they are real or imagined.  A bicycle bell sounds; rain clatters like a quiet train.  A smattering of folksong leads to footsteps on snow.  The seasons are tumbling faster than ever before.  And yet the order of seasons and memories seems to matter little now.  What matters is the love, the book that has become the story.  (Richard Allen)