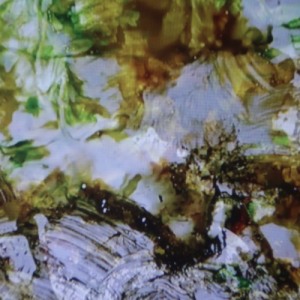 John Thayer of the duo Drunken Sufis has produced an enveloping sonic travelogue compiled from dustbin finds at Thrift Stores across the globe. When John first proposed this mix I immediately agreed, as the concept deeply resonated with my own experiences. I am always picking up thrift store tapes, especially when I lived in Montreal where there is a rich selection for 25 or 50 cents, 1$ max. Being an anglophone and an American, thrift stores tapes were one of my lenses into Quebecois culture.  This is equally true of used record stores in general, but in any particular place one will notice, while searching for those fascinating gems, that certain artists and genres will accumulate, and eventually begin to coalesce into a kind of scene even when one didn’t previously exists.  Why the obsession in Quebec with country western music, for instance? As many thrift store donations seem to come from emptying out old homes, these accumulations can also tell us something about particular immigrant communities in a city like Montreal.  I love seeing the kinds of genres or styles that accumulate in that way, depending on the communities that lived in each neighborhood, Latin dance music or religious music or what have you (I, for instance, have a growing collection of Greek bouzouki music from the seventies that I probably never would have discovered otherwise.) And when traveling on long trips it can become a burden to purchase too many 12″ records, while tapes easily fit in between your luggage.  Last time I popped into Amoeba records in San Francisco I found the tapes there to be the best value in the whole store, bringing home a John Fahey tape alongside some excellent West African orchestras.

Many journalists have periodically declared a tape revival over the last few years, even as the tape label craze probably peaked around 2012 and has since more or less plateaued.  I generally try to avoid fetishizing objects or feeding into nostalgia, but there is something to be said for the kinds of relationship that can develop around physical media that streams and downloads simply can’t sustain.  As John put it, “That’s how I ended up with those Ray Lema records, there was a stack of his albums and I picked up two because I saw Tony Allen drummed on one of the records…my favorite are the homemade mixtapes they’re like mystery purchases, sometimes you’ll stumble on something great :).” So enjoy a window into some of John Thayer’s most interesting finds. And if you enjoy what we do with this series, I encourage you to please share it far and wide. (Joseph Sannicandro)

Please introduce yourself.  Who are you? What do you do?
I’m a New York based musician and audio engineer. I work as an on-location sound recordist, a session musician and mix engineer and work primarily out of Thump Studios in Brooklyn.
Tell us some more about the mix
This mix is a compilation of dollar bin thrift shop finds I’ve acquired while on tour or traveling. Cassettes are cheap and portable, perfect for when space is a premium. I love to dig and enjoy the idea of a physical artifact. I’ll often sample small fragments from tapes I buy but occasionally I come across a track I really connect with and I’ll rip it and add it to my own playlist. I went through and compiled my favorites; voodoo drumming, field recordings, private press new age, Navajo sacred music, shakuhachi & Balinese gamelan.
Anything else you’d like to share?
I’ve long admired the rogue ethnomusicologist who unites travel and sonic discovery. There are so many wonderful records out there, so many mysterious sights and sounds, I hope this mix will bring a few to light. If people enjoy this playlist I suggest checking out my release on Power Moves Library’s Excavation Series. It’s an aural travel diary from my time in Thailand and Cambodia. The label’s entire Excavation Series is worth a listen!
Thanks, John!