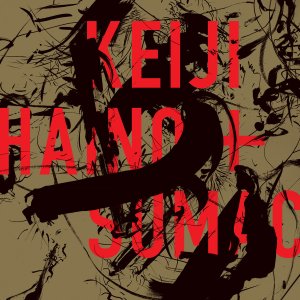 There’s perhaps a common thread to the overtly poetic names of the tracks in Keiji Haino & SUMAC’s collaboration, a thread that intertwines anger and passion in that characteristically playful Haino way, in which a measure of silliness opens up the intensity of performance to a humor laid bare. Even considering Nazoranai and Black: Implication Flooding with Boris, this is some of the heaviest music to come from the long, long list that is Haino collaborations, at least in the sense in which ‘heavy’ is traditionally associated to the crunching guitars of heavy metal. The grave, low-volume droning of SUMAC provides both contrast and accompaniment to the Japanese experimentalist’s yells and incantations, a tight relationship within a loose structure of fiery explosions and the absorbing, spirit-grinding landscape they leave behind. And yet, the darkness and the suffering in the extreme shifts of emotionality between the two parts of “I’m Over 137% a Love Junkie and Still It’s Not Enough” become arrested by the very name of the piece, the seriousness of the tone almost comically slapped by an undercurrent of lightness.

This is why American Dollar Bill works so wonderfully, given that metal and free improvisation (but metal in a much higher degree) are notoriously lacking in humor, most of it occurring incidentally and at their expense more than as part of them. I am not referring to joke bands, either, but to humor as a cathartic promise, as a kind of liberation from reason that takes a step back from the harshest elements of convictions and commitments that easily lead to the worst of narrow-mindedness. The negative emotions that course this music like lightning do not frame consciousness into a box of despair and hurt, but pull away suddenly like a Zen realization of a higher truth, like that Gibon Sengai sketch in which a bullfrog comfortably sits with a wry expression on its face, the calligraphy around it reading “If by sitting in meditation one becomes Buddha…”

Thus, the gravity of American Dollar Bill is not so much undercut as put into perspective, a rejection of absolutes and unitary truths that in the cannon battery of the artists’ instruments and talents becomes both a parody and a much better version of the mold from which the original seriousness is taken. I wanted to break stuff as early as the 5-minute mark of the first track (which lasts 20 minutes), but instead of finding in the desolate aftermath the highest expression of rage, this aesthetic delays the climax into laughter, into the instant when the joy for life from which that anger springs bursts forth as a guffaw. It’s the theremin wailing wildly in the midst of a noisy guitar cascade, the subtly gradual dissolution of tempo in a head-banging section, the grand wall of textures being cut suddenly to give way to a melancholic guitar solo full of delay. It’s all the moments where something jarring is at play, or where a sound seems out of place once you start thinking about it, that give the album its shadowy, humorous brilliance.

There’s a whole study to be made about Haino’s brand of humor, but his work with SUMAC perhaps brings it out with a clarity that might have not been possible in any other collaboration. This album is heavy as hell, yes, but in many ways it is also just as funny. (David Murrieta)