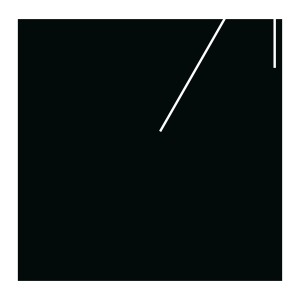 Far from the pensive or maudlin connotations usually associated with reflecting in a musical context, Philipp Rumsch likely titled his debut LP after the idea of collisions – not of light, but sound. Extensively trained and with youthful exuberance, the German composer seems to have approached its formulation with the experimental zeal of a scientist – or alchemist.

Performed by the 12-person Philipp Rumsch Ensemble, Reflections is a suite in eight parts whose composition was based on a somewhat reductive approach to orchestration. Consider the cover: Almost brazen in its simplicity, it depicts two lines travelling at different angles, having emerged at different times or speeds. The lines each represent separate rhythms, time signatures, instruments, genres – ultimately, separate approaches. At what angles will they rebound, or reflect, off the sides? At what point will they cross? Reflections is an experiment in how all of these intersect.

Its core is the intersection of rhythms, which are the foundation for most of three parts of the suite identified by a numeral. “Part I” throws us in the deep end. The full drum kit that appears throughout grooves with a piano in alternating 8s and 6s, its syncopation heightened by the straight brass and vocal jabs that enter. String and wind instruments smooth over the gaps, but eventually make way for an ostentatious polyrhythmic melody, swaggering in via mallets and plucked strings. Its accents illuminate different parts of the groove beneath it. The listener yearns to get up and dance – but would only end up in a tangle of limbs.

The extraordinary “Part IV” is even more deft and incalculable with its use of polymeters, this time paring each instrument down to simpler lines – straight 4s on the kick drum, a monotone sax, a five-note ostinato on clarinet, and so on. The tempo is quicker, the layering intricate and the momentum relentless – each voice ebbing and flowing until Rumsch discreetly, effortless deconstructs it to the bare bones again. Ninety seconds of vocalisation ends this captivating set highlight, the most daring of the composer’s dabblings with genre alchemy.

As well as genre and rhythm, Reflections also strives to unite the antithetical approaches of composition and improvisation. If the calculated cacophony of “Part I” and “Part IV” is the outcome of the former, their more spacious surroundings doubtless arose mainly from the latter. This contrast keeps the listener guessing. “Part II” progresses sedately, laconically, its pedestrian beat in time becoming enshrouded by a dusky haze of sombre horns and piano. Triumphant chords like rolling winds sweep away the fog in the final minute, marking the crescendo of the whole set. A droning cello guides us into a more comforting place: the second of two interlude pieces that assume shorter but no less engrossing forms. To close, “Epilogue” marks the dead of night – a reflective piano piece with reversed-note overdubs like flickering neon lights, jolting us from drowsy reverie.

The only misstep – and quite a jarring one – is sixth part “At Your Enemies”, a cover of a John Frusciante and Josh Klinghoffer piece. Its foundation is a compelling rhythmic guitar melody that initially blends, but when a prominent vocalist enters and the riff marches determinedly on, it feels increasingly in the wrong company.

That aside, Reflections is a bravura and innovative album that is bound to be a contender in the year-end genre list. What is most noteworthy – but having listened to the record, unsurprising – is the influence on Rumsch of pop music, which with several other genres he disguises under the veneer of modern classical. Along with his experiments, is the young composer making statements also? (Chris Redfearn-Murray)