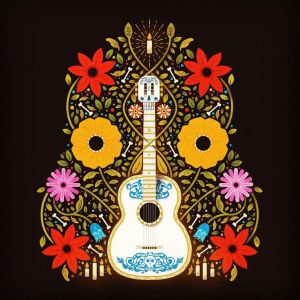 We wrap up our seasonal preview with a look ahead to the season’s releases in Rock, Post-Rock, Folk & Jazz, a category which includes all manner of mini- and maxi-genres.  We hope you have enjoyed this series ~ Happy Spring!

Our cover image as a perfect piece of fan art for the movie Coco, designed by Kid Nichols.  Visit the artist’s Instagram page for more great art!  Coco is the story of a young man who travels to the Land of the Dead, meets his ancestors and learns how to become an even better guitarist.  We wonder if Coco would be able to beat Kubo in a string battle, but that question will have to wait for the sequels.  And now, without further ado, A Closer Listen presents its final preview of the season!

Rich’s Pick:  DDENT ~ Toro (Chien Noir, 23 March)
We have the fine folks at Echoes and Dust to thank for this recommendation.  Toro is a massive blast of energy, and we’re amazed to learn that this huge sound comes from only two people.  Instrumental doom is not a genre we often cover, but this one’s caught our attention.  Great cover, too!

Is it jazz?  Jazz fusion?  Post-rock jazz?  When the vibe is this positive, labels don’t matter.  COAST makes a strong impression with its debut album on the very first day of spring.  We wouldn’t want to be caught in that wave on the cover, but we’re all too happy to listen from home (Art as Catharsis, 20 March).  Mike Kennedy calls his style “Americana jazz,” but there’s a little bit of post-rock in there too.  On Landfall, he explores the nation’s wide open spaces with a spirit of wonder and a tone of languid calm (24 April).  The duo Run Logan Run offers an upbeat blend of jazz and rock on The Delicate Balance of Terror, their name referencing the films “Logan’s Run” and “Run Lola Run” and the song “Run, Joey, Run” (4 May).  There’s a whole lot of percussion on Distant Early Warning, an album for sampler and kit that was recorded in a day.  While at times it sounds like a band, only Laurence Pike is involved, creating aural illusions (Leaf, 30 March).  A Hawk and a Hacksaw return with a beautiful blast of world music on Forest Bathing, drawing from Balkan traditions and encouraging listeners to dance with kewpie dolls (LM Dupli-cation, 13 April).

Connected View is billed as “instrumental pop”, but don’t expect Top 40 music.  Chun Pop drifts on vaporous clouds, daring listeners to get the munchies (Hidden Shoal, 21 March).  The label also has a really fun one in Todd Tobias‘ Massabu Evening Entertainments, awash in Persian rhythms and belly dancing percussion (23 March).  Lead track Do the Massabu may even remind some of the B-52s.  Speaking of the B-52s, one may also hear hints of “Rock Lobster” in Make Out Fade Out, the first single from Hormone Lemonade, upcoming from Cavern of Anti-Matter (Duophonic, 22 March).  Clothesline Revival bobs and weaves its way through Holy Cow, a funky effort that revives the Moog as a primary instrument (Paleo Music, 20 April).  4a Stables seems to be having a blast on Bugboy, drawing from styles ranging from widescreen to calliope (BNS Sessions, 30 March).  The Field Hymns label will release a trio of hyper-psych tapes on Easter, each one packed with rock and electronic flavors like rectangular Easter eggs.  The batch includes Lips and Ribs‘ Battle in Negoya, Oxykitten‘s Gleaming the Cube and Larry Wish‘s How More Do You Need?  And are you in the mood for cosmic cumbria?  If so, we recommend the lively third album from Sonido Gallo Negro.  Mambo Cósmico is released 6 April on Glitterbeat.

Erik Nilson‘s folk-inflected The Imperfect Tense showcases the work of the acoustic guitar but touches on electronics and post-rock as it progresses (Hidden Shoal, 3 April).  Fiddle, harmonica and cello help Slagr to touch on modern composition and drone, but their constructions are folk and rock.  Dirr is released on Hubro 13 April.  For pure American folk, turn to Marisa Anderson‘s Cloud Corner, a soothing antidote to the current political climate.  Initial copies appear on cloud-colored vinyl (Thrill Jockey, 15 June).  Buck Curran plays acoustic guitar on Side A of Morning Haikus, Afternoon Rain, but expands to other instruments and vocals on Side B (ESP-Disk, 23 March).  Mind Over Mirrors may be a solo artist, but numerous guest stars appear on Bellowing Sun, including members of Tortoise, Death Blues, Freakwater and Iron & Wine (Paradise of Bachelors, 6 April).  There’s still plenty of instrumental goodness to go around, starting with lead track “Zeitgebers”. 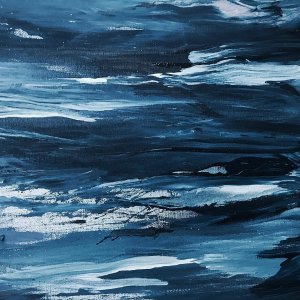 Veteran post-rock band God Is An Astronaut has been quiet for a while, but will return loud.  Epitath has all the necessary crescendos, and will be out 27 April on Napalm.  Also returning is Aesthesys, whose “Marea” was part of our article Ten Tracks That Sound Like Summer last year.  The track is included on Achromata, an energetic post-rock set released 3 April.  Some may regard John 3:16 as drone, but עשר should change all that.  The generous album ~ nearly three hours long when the bonus material is included ~ stretches well into the fields of rock and post-rock, and makes a solid case for the release of b-sides and rarities (Alrealon Musique, 29 March).  Static Storm displays a number of influences on Burial at Sea, from ambient to post-rock; he calls the EP “a soundtrack for the end of the world”, but implies a peaceful end (9 April, pictured right).  The pedigree of Silent Island can be traced back to numerous other bands and monikers, including musicformessier.  Fall of Oceans is out 1 May on Casus Belli Musica.  Singapore’s hauste wear the post-rock tag like a badge, and Leavings is an exuberant summation of their sound, replete with melodic guitars, peaks and valleys and a hint of glockenspiel (An ATMOS Initiative, 13 April).

Prog rock is written all over the face of the Velociraptor Attractor EP from Flux Velociraptor.  Tongue firmly in cheek, these lads bust out the big riffs, but they’re not afraid to add synths, or to put a little pink on the cover (20 March).  There are some lyrics on The Sheen‘s self-titled set, but they tend to be wedged between long instrumental passages.  This psychedelic concept album is also the second release this season to sport a new Tarot card on the cover: a trend? (20 March).  One guess what Weeping Bong Band sounds like.  You’re right!  The psychedelic trip begins on their self-titled album on Feeding Tube (20 April).  Speaking of psychedelica, we’re incredibly pumped for Hausu Mountain‘s HausMo Mixtape I, scheduled for release on 20 April (and an actual tape!).  But before that, we can look forward to a trio of releases from the label on 23 March: Arian Shafiee’s Beauty Tuning, Lockbox’s Free VDV Prayer and RXM Reality’s Panic Cycle, all of which can be previewed in the link above.  Bonnicons of Doom feature prominent echolalia, making their self-titled debut seem like a dance around a fire; initial copies are available on acid splatter vinyl (Rocket Recordings, 18 May).  Fugazi fans, rejoice!  The band’s rhythm section has reformed as Messthetics, and will unleash its jamming self-titled debut on Dischord 23 March.

Dirk Serries, Tomas Järmyr and Eirik Havnes have a great time jamming together on Distant Curving Horizon. The Primal Passage. Beneath The Scorching Sun (Midira, 23 March); with tracks stretching toward the quarter-hour mark, it’s easy to get lost.  Krautrock fans are directed to Kräuter der Provinz, the upcoming set from Datashock.  Don’t be fooled by the improvisational tag, as these jams come fully formed (Bureau B, 25 May).  Listening to the opening moments of “L.Layer”, from Actual Existence, one would be hard-pressed to identify the members of RLYR as veterans from Pelican, Russian Circles and Locrian.  But just wait ~ heavier parts arrive in due time (The Flenser, 13 April).  The pounding beats of Laconic Zero almost caused us to put Sun to Death in the electronic category, but we didn’t want to scare those fans; rockers are well-prepared for this vicious energy (Handmade Records, 6 April).