Psychological Strategy Board ~ Penny Slinger: Out of the Shadows 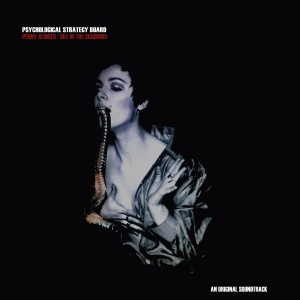 It’s rare that a debut act is asked to score a feature film, and rarer still that such an act surpasses expectations.  This is the case with Psychological Strategy Board, a duo comprised of Paul Snowdon (Time Attendant) and Maybury.  The task before them was huge: to create a score that captured beauty and ugliness, triumph and tragedy, creativity and contagion.  The album is the score to Richard Kovitch’s Penny Slinger: Out of the Shadows, a documentary that traces the circumstances behind the explosion and disappearance of a maverick artist ~ one whose confrontational images of female empowerment continue to split critics.  Slinger’s 1977 work, An Exorcism, seems even more haunting today, a lost collage classic waiting to be rediscovered.

While listening to the album, one considers the gothic beauty of the artist, the artistic drive, the instinctive strangeness that engendered such achievements.  It’s impossible to watch even the trailer and not to wonder about Slinger’s psychological state ~ a fact that works its way into the name of the duo.  The phrase touched by fire seems apt, as the average person would never think of taking such artistic risks; nor would they ever reap the benefits.

Psychological Strategy Board takes risks as well.  It takes but a minute for listeners to sit up and take notice, as the static charge of “Stereo Interference” tumbles into the synthetic shock of “Expression in Ruins.”  As the synths bubble and burn, one thinks of synapses firing, of wild ideas created in a manic phase, of the frenzy to write them down.  At first the tones are rounded like beeps.  By the end they are fraying at the edges.  Dark, measured breaths appear in the background: the monster is in control.  The propulsive momentum of “Rats in the walls of our mind” is offset by its disturbing title.  Not even the foghorn can scare the rats away.  Then everything slows to a stop, a studio technique popular in the seventies and perfectly placed here.

Dark bells toll; agitated birds sound a warning.  Psychological Strategy Board becomes a stand-in for Slinger.  The deeper they go, the darker they get, chasing the rabbit until the path is lost.  At what point is one permanently transformed?  How long can the dark stain stay before it can no longer be removed?  In “Phenomena shifts and back to the unfamiliar,” all perspectives change.  What at first seems a siren becomes a siren call, and in the subsequent track, an alarm.  “Purgatory in control of us” stumbles into hauntology, reminding us that the sound existed long before the genre tag.  Sounds rub against each other like disturbing thoughts, ignoring personal space.  Fragments of voice dangle in the ether like abraded sanity.  The loudest sounds arrive toward the end like the deepest knife.  Finally a clock, a music box, a bell, a return to the primordial state.

Kovitch’s fascinating, disturbing film will have its next screening at Bristol’s The Cube this Thursday. Psychological Strategy Board’s score is as much a character as the film’s subject: a dark soulmate to a forgotten life, now resurrected, darkness brought to the light it once shunned.  The subject, director and scoring team are now linked in this audio-visual collage.  (Richard Allen)