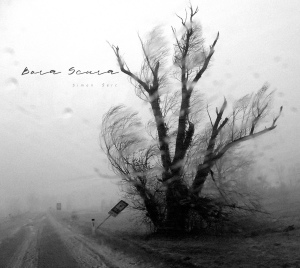 Since everyone has wind, one would expect to hear an overload of quality wind recordings.  Yet the opposite is true.  Simon Šerc‘s Bora Scura joins an extremely elite group, led by Lawrence English’s Viento and Daniel Menche’s Wind.  Meteorologists, take note.

Yet while everyone has wind, not everyone has wind like this.  It’s more likely during a nor’easter or blizzard.  But in Slovenia’s Ajdovščina (pop. 6700), it’s a way of life.  This cold wind, called Bora, blows on average 42 days a year and has been clocked at over 200 km/h ~ the record being 295.  It’s so strong that it’s been responsible for school and factory closings due to its ability to down trees, snap wires and even topple trucks.

The wind can be incredibly harsh or numbingly beautiful, as it is in this series of “Actions.”  Šerc put himself at risk to capture these recordings, but his efforts pay off in a set that sounds like the heart of a tornado.  By using condenser mikes with a furry windjammer and homemade windshields, he was also able to avoid the distortion that might otherwise have marred such an evocative set.  To listen is to feel privileged; these are sounds seldom captured in abundance.  When presented with 72 minutes of howl and squall, weather lovers will be overjoyed.  To play the album indoors is to be transported; to play it while a storm rages outside is ideal, creating an illusion of being in the storm itself.

The album’s standout moments are created when Šerc incorporates aural contrast: footsteps, voices, church bells, disturbed chimes, wobbling signs, troubled vehicles, and in the last track, the Bora wind passing through a closed window.  One remembers the citizens of Ajdovščina, most of them indoors but some, perhaps by necessity, venturing out.  The church bell is particularly poignant, a call to worship that none can answer.  The cumulative effect is apocalyptic; one imagines a town leveled, a desperate search for survivors.  Yet year after year, they do survive, as they have since the third century.  Winter sways to spring, and the Bora winds dissipate, gathering their strength for the next November.  The citizens come out to play, and once again the town reclaims its nickname, the Garden of Eden.  The winds surround the area like angels wielding flaming swords, but when they dissipate, prayers can once again be heard.  (Richard Allen)