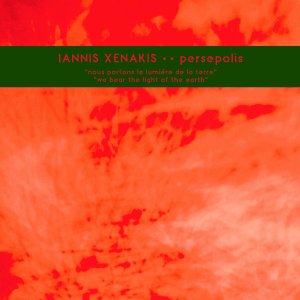 The story and context of Iannis Xenakis’ Persepolis is not only quite interesting, it is perhaps the key to understand what it was meant to do. Commissioned for the 1971 Shiraz-Persepolis Arts Festival, an Iranian institution which lasted from 1967 to 1977, Persepolis was one more work in an enormous variety of classical and avant-garde art productions from all over the globe that gathered and met at one of the most important cities of the ancient world. King Xerxes, back in the 5th century BC, had built a remarkable monument composed of two pieces: the Stairs of All Nations, which led upwards to the Gate of All Nations. The name was a testament to the ancient Persians’ cosmopolitanism and their multi-language empire, a metaphorical center of the universe upon which a world-spanning cultural thread was spun. All visitors to the royal palaces of Persepolis had to cross the Gate, upon which Xerxes had inscribed that “Much else that is good was built within this Persepolis, which I built and my father built. Whatever good construction is seen, all that we built the aide of Ahura Mazda.”

Xenakis’ piece was not meant to be played by a traditional musical ensemble, arranging a multimedia spectacle staged in the dark of night all over the archeological site of the ancient city, using two lasers and ninety-two spotlights that projected patterns that evoked the Zoroastrian symbolism of light associated to eternal life. Fifty-nine loudspeakers projected, in turn, eight channels of sound throughout the audience, who, in the distance, could see bonfires burning and parades of children carrying torches over the hills, forming even more patterns, the most important of which was a message ‘written’ in Persian: “We bear the light of the earth”. Ahura Mazda, the main deity of Zoroastrianism, is a wholly benevolent god, the author of all beauty and vitality, a god that wants humanity to participate with him in furthering creation towards perfection. This invitation comes with no strings attached – no punishment, no reward except that of a better world. Those who followed this call saw themselves as a free-willed brotherhood united in a cause alongside their god to transform the world; their prophet, called Zarathustra, extolled that “may we be among those who bring about the transfiguration of the earth.” The ‘light of glory’, out of which Ahura Mazda had created everything in existence, filled the heavens, albeit it was but latent and undeveloped in matter. Zarathustra’s aim was not to pitch light against darkness, but to make the light of all things emerge and evolve, the goodness of Ahura Mazda reflected in each and every object that made up the world. The transfiguration of the earth, as a final state, is an image of a universe illuminated in its totality, granting meaning, value and transcendence upon everything. Fire, being the most basic source of human-made light, plays therefore a pivotal role in this myth.

The Greek-French composer described Persepolis as “neither a work of theater, nor a ballet, nor an event. It is visual symbolism, paralleled in sound, and in the end it is sound –music—that must prevail at all costs.” An Iran that projected modernity, a Persepolis that was once again the center of the universe, the stillness of the ruins ablaze with life and movement: transfigurations all of opaque matter, setting fire to tradition, to the classical, to the experience of the concert and of art, in order to bring forth the light and hear new meanings, see new values in things considered perennially at rest. Against the claim that Xenakis was a postmodernist, there’s a distinct search for the truth in a work such as Persepolis, the good in all things, the dismissal of artifice as a blinding darkness to which there must be a scientific response, a methodical quest for the language of nature, the well-known mathematical and architectural ideas that the composer worked with. Persepolis itself has suffered from the fate of any and all ruins as they are excavated and reinterpreted, first by the composer himself as a vinyl reduction from 1972 (reissued in 1974) and then in various CD versions with altered durations, even if all of them were taken from the original 8 track tapes. Zeitkratzer sound engineer Martin Wurmnest and experimentalist Rashad Becker have now mixed this latest iteration of the original with the aim to bring it as closely as possible to the mythical first performance of the work, and the result is a fascinating document that brings out the light of all the versions that preceded it, including the first.

This is music meant not to change the world figuratively, but actively, even if just for the briefest of moments. Imagine what Persepolis felt like, brimming with drones and electronic hisses, the Gate to All Nations emanating thick waves of noise never-before-heard towards every cardinal point in the presence of musicians from all over the globe, the stones trembling with the promise of a light within, the clichéd message of the children bearing torches as they announced the complete transformation of the earth… there are truly few words to describe music like this, because like the essence of Zoroastrian illumination (and all religious truths), it is sheer poetry. It is a vehicle of creation, all its strange echoes and its jagged, hurtful edges of droning volume an aural image of the world to come, bearing the experience of a radiance divine. No wonder was Zarathustra first and foremost a poet: to aid Ahura Mazda in the creation of a better world, you need to be a creator yourself. Set Persepolis free in any room, and watch it shine, watch it melt and become what it was always meant to be. Let your brain be wracked by its incredibly complex contours and its apparently infinite depth, letting your heart burn with the desire to give it form and to create, like Xerxes, like the Shiraz Arts Festival, good things to change the world with. (David Murrieta)