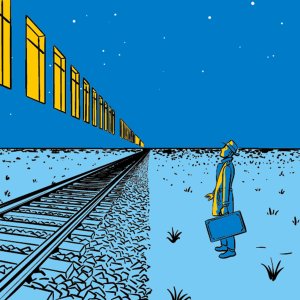 When does summer start?  On the Irish calendar, the season began on May 1; Australians must wait until December 1.  For Americans, the unofficial launch is Memorial Day; for meteorologists, June 1.  The official Northern Hemisphere date is June 20.  For most of us, summer starts with milestones: the end of school, the beginning of vacation, the first beach day, the day we pack up the sweaters and break out the shorts.  A lucky few have summer all year long, although they call it by different names.

We’ve been saving some of these tracks for months, rescuing them from albums released in the heart of winter.  Others are from albums not yet released.  They come from different genres, but they all have one thing in common: they sound like summer.  Whether you’re already excited about the season or hope to get in the mood, we’ve got just the selection for you!

You may be wondering where that cover image comes from ~ it’s Stu Medley’s Hidden Shoal label art for Liminal Drifter’s Night Train Remix of Kryshe’s track Lullaby, part of 2017’s The Night Train Vacancies. The original track can be found on Kryshe’s EP In Between, while Liminal Drifter’s upcoming album is listed below!

Flavien Gillié ~ And I’ve never dreamed of the sea again (Waves – Pebbles) (Sound Is All)
I am a rock, I am an island was released in January, while most of us were warming up our cars and wiping snow off our boots.  The sounds were recorded in Gran Canara, a lovely Spanish island off the coast of Africa, where the daytime temperature was a lovely 70F/21C.  For a time, we could listen and dream. This set alternates between wave tracks, bell tracks and Mass tracks, but the water recordings are the best, and the sound of waves retreating from pebbles evokes a relaxing summer vacation.

Halftribe ~ For the Summer, Or Forever (Dronarivm)
Shifting from field recordings to ambience, the title track of Halftribe’s just-released album eases us gently into summer.  Water flows, birds chirp and peaceful tones immerse the listener in a placid pool of peace.  The liner notes state that the set is meant as a soundtrack to “summer – or eternity.”  Time disintegrates as the album progresses, justifying the claim.

Valotihkuu ~ Sitting on the Grass under the Stars (Whitelabrecs)
Fragile Melodies is another just-released summer album.  With track titles such as “Wind Chimes in June” and “A Dream in a Summer Night,” the invitation to rest appears before a single note is played.  Our favorite track, “Sitting on the Grass under the Stars” includes the sound of nighttime crickets and draws us back to the fuzzy blankets of our childhood, when we gazed at the constellations and dreamt of our hazy futures.

Detieti ~ Dream of Little Forest Animals (BNiL)
“Dream of Little Forest Animals” is unlike anything else on Moscow quartet Detieti’s brand new album ~ but the same could be said for any track in the set, which includes operatic segments, onomatopoeia, progressive funk, punk pounding, military drums and brass parades.  This tiny glockenspiel and guitar piece sounds like an outtake from “Where the Wild Things Are”, and serves as an intriguing invitation to the full album.

Cool Maritime ~ Climbing Up (Leaving)
Cool Maritime is the pseudonym of Sean Hellfritsch, who is married to Kaitlyn Aurelia Smith and also shares her love for modular synth.  His upcoming album is all about nature, from forest to shore.  Much of it was both recorded outdoors and commissioned to be played outdoors as part of an installation.  A laid-back vibe permeates the recordings and reflects the artist’s surfing background.  Sharing Waves and its companion remix tape will be released on June 1.

Liminal Drifter ~ Beach Fair (Hidden Shoal)
We’re back at the shore in “Beach Fair”, the first single from Liminal Drifter’s ocean-themed album The Dreams (June 12).  We can picture the paddles, the fins, the snorkels and the colorful fish waiting at the reef.  A prior album included the hit single “Soothed by Summer” and the new release continues in this vein.  For a fully immersive experience, get those waterproof ear buds and give this one a spin!

Phantoms vs Fire ~ Swim (Hypersoma)
File this under “How did we miss this?”  The answer is simple: the album was released on January 4, when much of the Northern Hemisphere was caught in the Arctic tundra (where I live, -7F/-22C actual temps).  Suffice it to say, we were not thinking about swimming, or even venturing outside if we could help it.  But as it turns out, Swim (re-released with two bonus tracks on January 26 ~ still cold!) is the perfect summer album, packed with engaging beats, sweet strings and an upbeat vibe.  It’s already packed in my car, ready to accompany me to the beach.

Floex & Tom Hodge ~ Wednesday (Is the New Friday) (UMG/Mercury)
A Portrait of John Doe won’t be out until June 29, but for now we have this amazing preview piece (also available in a Hidden Orchestra remix).  “Wednesday (Is the New Friday)” is a brilliant blend of modern composition and electronics, marked by multiple eruptions of brass.  One can imagine it as the theme of a summer action movie, but it’s even better as a midweek pick-me-up.  Thank God it’s Wednesday!

Lapsihymy ~ Wonder (Self-Released)
Our Finnish friend is back in action, combining ambient swirls with stuttered beats and vocal loops to produce an engulfing, euphoric sound.  “Wonder” is the first track to emerge from Collections 2, set for release this Friday.  As a bonus, it’s offered as a double A-side single in clear or black vinyl.  The entire album is wonderful, like a sunrise and sunset falling in love.

Hauschka ~ Late Summer (1631 Recordings)
Six artists, three EPs, thirty tracks ~ 1631’s Box Set is a treasure trove of piano-centered music, released just in time for summer.  And while late summer is far off, it’s nice to have this elegant track as the coda to our set.  To be honest, it sounds more like mid-summer, its fast pace and staccato strings lifting our mood like the morning sun burning away the fog.  Happy summer, everyone!