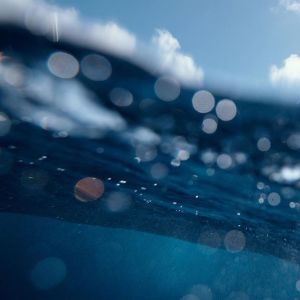 This lovely summer set began as the score to an acclaimed 15-minute documentary about famed surfer/graphic designer David Carson.  In a rare turn, the full score is longer than the film, and has its own distinctive appeal.  Freed from the storyline, All For a Few Good Waves is able to capture the impressions of the sea in motion, along with its human passengers.  From the early morning call (“It’s going off!”) to the anticipatory drive, from the waxing to the paddling, from the waiting to the riding, these songs offer a score to a golden day, when set after set is breaking, friends are taking turns and nobody is dropping in.

Zach Abramson, Derek Muro and David Perlick-Molinari bring complimentary talents to the table. Together they form YouTooCanWoo, a Brooklyn-based studio and label.  Muro is also a founding member of the indie band Violet Sands, whose positive vibe is reflected in this production.  This is their first instrumental release, which puts them solidly on our radar.  But it’s the quality of the music that wins them a review, led by a tone that lines up perfectly with the season.

The first time I listened to the album, I was on my way to the beach, road-testing the music to see if it lined up with its subject matter; it did.  The half-minute prelude leads directly into the album highlight, “Surfing On Glass,” which is like an overture for the upcoming day.  In the mind’s eye, one is already picturing the waves.  The vibraphone folds directly into speaker-wandering drums and electronics, a bass drum catching the pulse like a surfer catching the lip of a breaker. A brief interlude offers calming chords that reflect the heart in the glass tube, the hand flowing through the walls; and then the energy quickens again, with brass tones scoring the final shot from the cylinder, followed by a gentle glide.

One might wonder if the tracks are in order, but a surfer’s day consists of more than a single wave.  A few good waves would be worth it.  When the pace slows, one is reminded of the pensive minutes spent waiting, perhaps looking down to see a sea turtle make its languid way beneath the board.  Another set will arrive soon enough (“Everything Is Different”): ten minutes in album time, a perfect wait in ocean time that allows one to get back in position.  In the meantime, the strings add a sense of grace; this is a grand adventure.  The piano passage in “All Things Considered” offers a transportive moment, like the revelation, out there on the waves, that one is blessed.  Finally, “Glowing”s guitar implies sunset and inner peace; this has been a perfect day.  (Richard Allen)