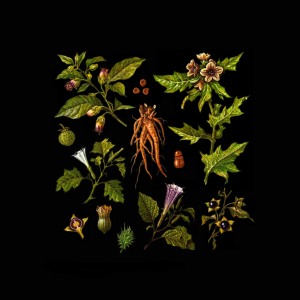 Last Fall, Folklore Tapes launched their Folklore of Plants series with a multi-media collection of flora-related material.  Volume II zeroes in on one specific subset: poisonous wort.  Sam McLoughlin showed his affinity for the subject on the first volume with an entry on the psychedelic henbane. On this 10″, he is given room to expand his vision.

An extensive essay explores the manner in which such plants were used in medieval times: as medicine or as poison, yes, but also for illumination.  As McLoughlin writes, “Their use is known to have formed the basis of many marginal folk practices, practices that … involved out of body travel, spirit contact and ritual possession.”  This connection places Volume II in line with the label’s other releases, inspired by Great Britain’s occult past.

The music is appropriately mysterious, like a stroll in a magical yet possibly malevolent forest.  Old noises clash with new, homemade instruments and synthesized whorls.  The opening segment seems designed to instill a trance; the winding noises of the second part are met by dramatic operatic wails, trapped between voice and violin.  How deep do you want to go?  By the end of the first side, the river fairies and forest spirits have come out to gambol, and are no longer shy about making noise.

Side B begins with a cry between realms, neither human nor bird.  The hallucination is in full effect.  After an elegiac mid-section, the spell is broken in a gurgle, then a crash of thunder: the watering of the green analogous to the enlightenment of the mind.  The grounded nature of the field recording is a welcome intrusion, a call of retrieval akin to the shaman summoning the disciple back to reality.  After such a trip comes euphoria, but then a letdown as the traveler learns that no words can describe the experience.  For this we have the music, culminating in the final off-key chimes.  (Richard Allen)