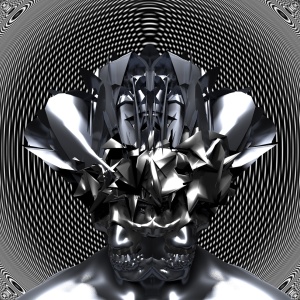 Siete Catorce is a Mexican producer closely associated to the ‘ruidosón’ movement, a musical reaction to a country torn apart by war, all the once joyful dances bathed in neon lights of border cities now a ghostly presence amidst bullet-riddled ruins. Like the angry techno of late 1980s and early 1990s Berlin, ruidosón grasps an existential moment of horrified disappointment, a defeated futurist’s knowledge that the past was not, perhaps, ideal, but it was also not as cold as this, our survivalist, merciless present. It all comes down to a sensation, to the ways in which memory weaves together our emotions, history as a psychedelic experience of eternal transitions between excruciatingly intense affects. There’s a saying in Mexico that nothing ever happens, but its truth is perhaps not that nothing ever changes, because everything always does, but that we are incapable of recognizing anything – we are, in a way, forever stuck in a bad trip.

Agnosia is the incapacity of the brain to process the senses’ reception of stimuli, leading, precisely, to a person’s inability to recognize anything. There are various types of agnosia, including a musical one, but perhaps the most interesting aspect of it related to this EP is that each track is named after a communicative interaction: “Risa” (laughter), “Canto” (singing), “Susurro” (whisper), and “Diálogo” (dialogue). In a context in which the happiness implied by approaching another has been violently exorcised by a seemingly endless war, there’s a fundamental dissonance in the communion of partying, in which the accelerated cumbia of “Risa” leads not to a contagion of smiles and warm immediacy but to the fragmentation of its sound into an ambient occurrence, a cut-down experience of something far too distant to remember exactly what it was. It leads straight into the electronic haze of “Canto”, where voices mumble and breathe, a punchy, noisy track with a hybrid rhythm that sways in and out of focus, from action to passivity, from something human to something that is hard to know if it is. These two tracks and their transition are Agnosia’s psychedelics at their best, a gloomy danse macabre in which, nevertheless, community does not ever quite come to be.

The B-side of “Susurro” and “Diálogo” drives the beats and the noise harder still, against the very acts their names represent. The former track spends a full minute droning before introducing its beats, playing with electronic pulses and pauses that trump any and all possible softness. It builds up a grinding sensation, a series of moments in which the dance stops, the world spins eerily out of place, and there’s nothing else to do but keep moving – everything out there lacks any sense, any meaning, and yet there’s a rhythm in need of picking up, once again. “Diálogo” goes full-blown techno, its voices scrapped beneath the harshness of the beat, intervened, if only for a moment, by a wayward piano sequence. All of it is blurred, all of it is out of place, and there’s no choice but to keep up, to accelerate your movements with the changes, to let history immerse those limbs of yours into a vat of acid, emerging not anew, but unrecognizable even to yourself.

This is a harsh EP from one of Mexico’s harshest scenes, not solely because it is rough or cruel, but because it understands. It understands the estrangement of our current conundrum, it understands that all that once promising urban energy is now the sand of a desert that the sun refuses to stop scorching to the bone. The thing is that maybe, just maybe, if we dance angrily enough we can make the sun finally stand down and let us recognize each other through the fading sunlight. (David Murrieta)