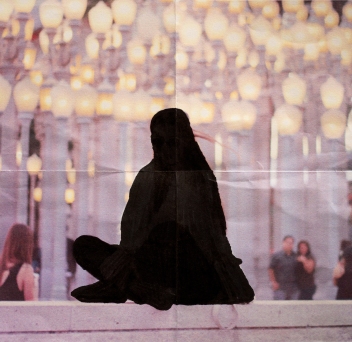 Chestnut‘s music is a strange safari. Florida natives, but now based in Los Angeles, the duo, comprised of visual artists Christina Santa Cruz and Daniel Watkins, use dark, mold-covered guitars and subterranean bass frequencies to produce an unsettling, dislocating album revolving around disconnection and general upset.

Lives are, for the most part, constructed around logic and reason. A routine equals a sense of control in a world that prizes chaos and is anything but controllable. Categorizing, rationalizing, and dismissing strange occurrences becomes the normal response. Science can explain it, or it will do at some point in the future, and so the unexplained can be marked in permanent ink with the words ‘yet to find a plausible explanation‘. Sometimes, though, the world inverts, turns upside-down, and the unexplainable breaks through. Things don’t always make sense, and Chestnut’s shadow-strewn music is a part of that inversion.

Reality has encountered a critical error and needs to close. Do you want to send an error report?’

A friend may tell you about a ghostly visitation, while a psychologist will insist it’s all a trick of the mind; that you were, on a deeper level, already thinking of him / her, and that it was less a phantom manifesting before the eyes and more a powerful conjuring of the mind. But the music makes the former all too plausible. Not everything can be explained. Only four years ago, Malaysia Airlines Flight 370 took off on what was a routine flight from Kuala Lumpur to Beijing and vanished. It was a Boeing 777; technological sophistication is not enough.

99.9% of the world can be explained away, but sometimes, things fall through the cracks. One look at the news is enough to know that the world is sick, diseased, thoroughly insane. No More Pictures Of Urban Light is a mystery itself. Be it paranormal or not, the music can never be explained (which is great for the audience, not so great for a music writer), and nor would you want to dissect it, because its charm lies in its unusual textures and its surreal massaging of the senses. The resulting effect yields a disconcerting record that lies just out of one’s grasp, a dark, unusual foray into unexplainable sound. Chestnut’s music feels thoroughly dislocated from the world, truly a dark and curious thing, but rather than breaking, the disconnection only serves to make the record more cohesive, pulling it into the lonesome world of the outsider. Invisibility in a world obsessed with selfies, uniformity, and body image.

A dark guitar will loop around from time to time, but it’s difficult to know just where it begins and where it ends. A revolving bass gives off disorienting vibes. Peripheral vision is a lifesaver, but things scuttle at the edges, shifting in the style of House of Leaves, poking holes through reality’s attire. The bass drops depth charges inside the music, which distantly detonate. The light-shirking music prefers to stay underground, away from others, coiling in on itself. And, day by day, becoming angrier, sucking up its discontent before fully venting it; the kind of poisonous disconnect associated with Jihad and terrorism. The government will criticize its younger populace – it’s good for telling you what to do – while simultaneously providing nothing in the way of opportunity. That hostility has been created by a government found lacking in the first place, and that only leads to more crime, further disassociation, etc, etc. Hate breeds hate.

Both Side A and Side B are twins, with only subtle differences between the two, but B is the more threatening. Until, that is, a complete 360, which happens three or four minutes before its death. A bell tinkles, the kind used to begin and end a meditation session, and it signals a sudden stillness. Something is calling out in the silence; distant birdsong, or something else inside the field recording, muffled by mileage. No More Pictures Of Urban Light is a surprising listen with a couple of tricks up its sleeve, including something of a twist right at the end. One thing is definite: it never stops intriguing the listener. Sometimes, it’s better to not ask questions, to not seek an explanation when none is really needed. (James Catchpole)