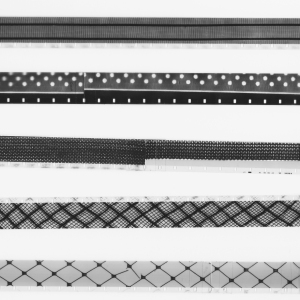 Last year, the Industrial Folklore Tapes series (which is actually a vinyl series) made its debut with Instruments of Industry and Springs.  Like its predecessors, the third installment shines a spotlight on a professional art that is rarely noted and is swiftly becoming extinct.  It’s also a collectable set that includes a machine-sewn booklet and a “fabric photogram.”

Can film be sewn?  Apparently it can, as demonstrated in the performance Film as Fabric, from which this 10″ release gets its name.  Mary Stark comes from “a long line of needlewomen … with a history of working in cotton mills,” which makes her connection personal. Film As Fabric is not only personal, but personable, especially when Mary offers to sing a song, and does, her voice wobbling a little bit to expose the humble smile beneath.  The song’s attitude is similar to that of the Seven Dwarves’ “Whistle While You Work,” the tone continued on Side B with samples of a vintage record.  The textile industry of Lancashire may have required long hours; the conditions may have been harsh.  But there was also great dignity in the profession, and joy.  In like fashion, linear film editing is now out of vogue, joining such related fields as dark room development and reel-to-reel splicing.  Stark recalls old arts with fondness, preserving their impressions in an aural collage rich in “optical sound.”

The rhythmic nature of these recordings is reminiscent of Björk’s “Cvalda.”  One expects the workers to begin twirling, their bodies in tune to the sewing machines, film projectors and unspooling reels.  The term “industrial music” has become synonymous with hard beats and guttural vocals, but this is the true sound of industry.  When applause breaks out at the end, we recognize this as a live performance.  By turning work into play and memory into celebration, Stark creates a contagious enthusiasm.  She wears her subject well, in this case literally as well as figuratively.  (Richard Allen)