While it may be the middle of Summer this Winter tape batch is still well worth your attention. But I should apologize. I listened to these four tapes many times throughout the long winter in Minnesota. February was predictably frigid, mad March kept me working frantically, and I sat down to finish this review in mid-April only to get hit by a blizzard. So now that I’m safely back on the East Coast with no chance of snow in sight, let’s give this another go.

When Constellation Tatsu first launched in 2012, my initial reaction was one of confusion: did Constellation start a tape label? While many Montreal notables have appeared on the label (Hobo Cubes, Kara-Lis Coverdale, Sarah Davachi), they are in fact of no relation to our beloved friends in Quebec. The Oakland-based label (self-described as “adventurous with spiritual artistic sensibilities”) has certainly earned our praise since then, with no shortage of excellent releases. To name but a few highlights: Chihei Hatakeyama, Andrew Weathers, Pleq, Quinn Walker, Alexandre Navarro, C V L T S, En, Jefre Cantu-Ledesma, and Jonas Reinhardt.

One of the great things about this label is that, in addition to their excellent seasonal batches, they offer us the chance to put together our own “mixed batch,” choosing any four cassettes for just US $16 total (including shipping and digital downloads)! Seriously, this is an amazing label. And of course you can check out their catalog over at Bandcamp.

The Winter Batch 2018 is a perfect place to start.  Four different takes on ambient music that may help you relax in what is already looking to be another stressful year. Put on some tea and get cozy…  (Joseph Sannicandro)

Rose ~ Transference
Rose isn’t an artist I’d previously encountered (despite two previous tapes for the label), but this is one of the great advantages of the batch system. Transference is an impressive introduction, one that might easily have slid under my radar. Seven-minute opener “Eros is Burning” slinks into being as drifting clouds of distorted tones occasionally part to reveal digitally splattered vocals. At times, a driving 130 bpm beat grounds the drones, setting the tone for the largely more rhythmic and economical five remaining tracks. “Seasalt” hearkens back to the ’80’s with a prominent 808 cowbell, a lively beat propping up an otherwise lethargically swaying chord progression. The eponymous track strikes a somber, occasionally ominous, tone but nonetheless the dominant vibe of Transference is relaxed and inviting.
. 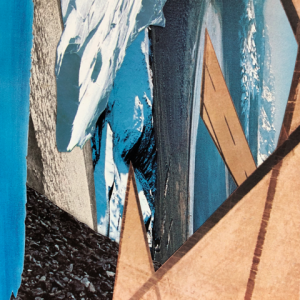 Hakobune ~ Parhelion
Yet another superb installment in Hakobune’s growing oeuvre prooves he remains an artist to watch. Consisting of two side-long tracks of swelling guitar drones, these calm and cool excursions in sustain and subtle fluxes in overtones are far more engrossing than they sound. While I love the visuals of the cover art, sonically Parhelion evokes more of a monochrome.

There is a kind of minimalism at work, a halo effect perhaps not unlike the albums namesake phenomenon.

memorygarden禅 ~ districtアトランティス
A suite of lovely compositions, memorygarden禅‘s contributions stand out as the most melodic and rhythmic of the batch. The almost toy-like quality of some of the tones evokes a sense of nostalgia, like an ambient music box.  districtアトランティス (or district atlantis) capitalizes on the sweetness of its melodies and upbeat pace to suspend listeners in the sweet-spot between holding ones attention and allowing the listener’s mind to wander. I wouldn’t be surprised if the artist behind memorygarden禅  will soon be scoring music to accompany other media.  Equally  well-suited to play in the background while cooking dinner, one headphones on the bus, or to soundtrack an afternoon on a glass-bottom boat.
.
.

Celer + Forest Management ~ Landmarks
Landmarks is the first collaboration between two artists who need no introduction. The more experienced Celer (Will Long) is joined by the up-and-coming mid-western master of plaintive ambient-drone, Forest Management (John Daniels). Their two styles are distinct but here it is difficult to tease out who is doing what. The result is, therefore, a coherent take on collaboration more than a dialogue between two individual voices. “Embera” is somewhat reminiscent of the forest ravescapes of Gas. The tape is book-ended by “7° 10° 77° 83°” and “Rights of the idea or a machine”, each ten-minutes of dreamy loops oscillating between past and present, hope and despair, book and film. Landmarks takes as its source material The Mosquito Coast, both the Paul Theroux novel as well as the 1986 film starring Helen Mirren, River Phoenix, and Harrison Ford. Three of the 14 tracks are short interludes consisting of vocal samples from film, each showcasing a different of the film’s stars. One solution to the deep malaise of the present seems to be a retreat into nostalgia, but Landmarks interest in The Mosquito Coast works just as well as a warning of the dangers of nostalgia. While we may empathize with the distrust of consumerism and bleak outlook on the future, the hubris of Allie (Harrison Ford’s inventor) should be enough to warn of the dangers of trying to build utopia on the fantasy of “the primitive.” The general sense of foreboding and the critique of a romantic/colonialist retreat into individualism seem well suited to the present moment.  (Joseph Sannicandro)
.