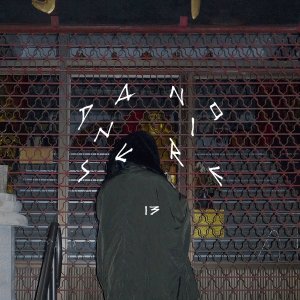 A fast and fierce story accompanies this intriguing EP by Taiwanese artist Meuko! Meuko! It tells of a dream in which the narrator finds herself a part of a small gang of scavenger children in a Blade Runner landscape of a city seemingly too old to represent the future. The music is industrial both in tone and spirit, aggressively laying down complex beats while electronic drones engage the ear with a haze of harsh noises. Ceremonial Buddhist horn sounds sweep the EP, worked into a striking contrast with the voice of Meuko! Meuko! as she chants/screams and whispers in equal measure. Rare is the music that sounds truly relentless, that not only pierces the edges of our senses but that also draws the mind away from everything and anything else; 鬼島 Ghost Island never lets up, the story an aid to focus the assault into something intelligible, in the same way that the heterogeneity of chaotic cities is laid into senseless yet relieving patterns by perception so as to prevent the brain going mad with stimuli.

The EP is five tracks long and includes two remixes, which rework the religious undertones of the tracks into different kinds of mystical experiences, whether in GIL’s use of Arabic vocals or Dutch E Germ’s restructuring of “眾神廟 The Temple”, arguably 鬼島 Ghost Island’s strongest, harshest track, into a black-light dancefloor sequence. This is where the relentlessness leads towards: a hypnotic, mystical experience in which Meuko’s prayer-like singing in screams and whispers affirms an experience not of communion and a harmonic, humanist sentiment, but its opposite, a fragmentary blast of noise whose form of coming together is dictated by the uproar of the ruins of a planet now transformed into a single titanic city. In the story, a temple that holds the corpses of divinities floats away, revealing that “humanity will inevitably return to its primal state among the ancient forests, and that the temple suspended in the heavens contained the ghosts of humanity.” The music itself, then, is an industrial rite meant for the dead. Humanity returns to its primal state, but not in the way we would like to imagine.

鬼島 Ghost Island is one of the most promising releases I’ve heard this year, managing to be complex, powerful, and emotionally striking all in the span of about 25 minutes. I hope it is followed up with an album just as strong, accompanied by another hectic dream story or another element that fulfills the multimedia potential that Meuko’s music pretty much inherently has. (David Murrieta Flores)