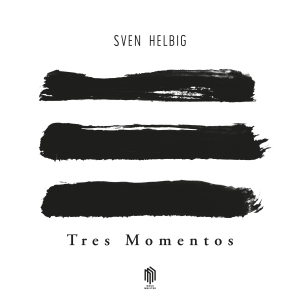 Tres Momentos is a unique release from a unique composer, whose previous works have ranged from choral to electronic.  The current stringed suite is a live performance, inspired by the I Ching and accompanied by a pensive puppetry video.  Directors Omayra Martínez Garzón and Sebastián Camacho convey a yearning for stability in a world of constant change.  The protagonist seems to lose, pursue and regain his chi, but is worn out by the experience.  The words “You Are the Universe” appear at the end of the video, but their meaning remains cryptic.

The music is similarly mysterious, packed with drama and resolution, open to multiple readings.  The heart of the set is the four-movement suite, although a bonus edit and string quartet version of the final piece are also included.  Our recommended listening order is the quartet track, followed by the suite; in this manner the stringed version operates as an overture, finding its culmination in the concluding segment.

Surprisingly, the defining characteristic of Sven Helbig‘s concert with the German Chamber Orchestra is its only non-orchestral element.  As gorgeous as these strings may be, morphing from suspenseful serenade to foreboding waltz, the electronic elements command the attention.  “El Premiere Momento” begins with a scratchy sound like that of a needle at the end of its vinyl journey.  One thinks of the old man in the video, chi running low.  The movement is infused by an enormous weight.  By the end, the orchestra’s bows seem nearly too heavy to lift.  They make a strong recovery in the second movement, as if to rage against the dying of the night.  A percussive electronic pulse underpins their surge.  The theatrical impact is akin to that of Lalo Schifrin’s film scores, albeit without the jazz influence.

Foghorn blasts and volcanic bubbling dominate the third and strongest movement, which is nearly apocalyptic in nature.  Where lesser composers might hold back, Helbig goes full force, ending with a pair of explosions.  The waltz arrives in their wake like an aftermath, the survivors dancing amid the debris.  The vinyl scratch returns, completing the cycle.  We’ve returned to where we started, only to find that the river has changed.  But are we any wiser as a result?  (Richard Allen)