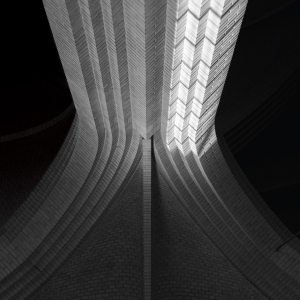 Drone Signals is a companion piece to the exquisite album Staccato Signals, released earlier this summer.  One might call it an alternative take, a reimagining, a broadcast from Earth-2.  Just don’t call it a remix disc. Technically one would be right, but the terminology misses the point.

The best way to appreciate the differences is to listen back-to-back.  The last track of the first album becomes the first track of the second, virtually unrecognizable in its new form.  The metamorphosis from “Black Castle” to “Burning Witches” preserves the darkness, the sonic surges and the cloud of sound, but stretches the strings, as if on a medieval rack.  The themes can still be heard and appreciated, but the approach is different.  The long note is more important than the short, the mood more than the melody.  This being said, Drone Signals is still too composed to be called a drone album.  Harmonic clusters descend like fog; but in tracks such as “Lost at Sea,” the fingerprints of the “original” compositions are clearly discernible.

We use quotation marks to indicate that the order of events is unclear.  Ben Chatwin had one album in mind before he recorded, another when he recorded and a third afterward ~ which may or may not echo his original vision.  Suffice it to say that the artist has achieved the rare metaphoric accomplishment of having his cake and eating it too.  Both albums are powerful, so much so that it’s impossible to choose a favorite at this juncture.

The most obvious difference lies in the most prominent element ~ the strings.  The final addition to Staccato Signals changed the artist’s approach.  Think of it as having an unfrosted, yet delicious-looking cake (for consistency’s sake, we’re sticking with the analogy), but just as one is about to take the first bite, someone runs in with frosting.  Yum, frosting!  So of course one frosts the cake.  But later one wonders, “What would the cake have been like without frosting?  Or what if I had integrated the frosting into the cake ~ for example, as filling?”  (Ben, I really hope you like cake!)  One decides to make another cake with the same ingredients, adjusting the proportions and smoothing out the contrasts.  Now we have Drone Signals.

“Dendrites” is dominated by dark tones, crunchy electronics and a sense of claustrophobia.  When the clouds roll away in the final minute, the strings are exposed like rays of sun.  In this case, fewer strings have a greater impact; less is more.  The use of modular synthesizer has a smoothing effect, making the transition seem as natural as an atmospheric change.  Will there be a third album (Ambient Signals)?  It’s entirely possible.  Chatwin has opened a window into the compositional process, allowing us to see the world that might have been, and by a trick of the light, still is.  (Richard Allen)