A-Sun Amissa ~ Ceremony in the Stillness 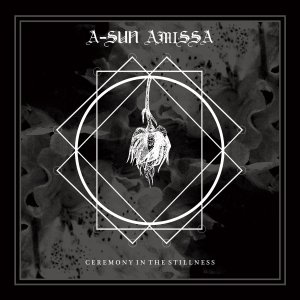 Ceremony in the Stillness is billed as a development in the evolution of A-Sun Amissa, the group founded by Gizeh leader Richard Knox.  It’s hard to believe that this is the first time we’ve heard drums on an A-Sun Amissa album, but they appear on “The Black Path,” the very first track.  Perhaps our surprise is due to the fact that Knox has appeared in so many other projects before this, most relevantly (due to the presence of drums) FareWell Poetry, but also quieter acts like The Rustle of the Stars.  “The Black Path” may seem a left turn for this particular project, but it’s not a stretch for Knox, whose many collaborations have cemented his reputation as a generous musician.  Thanks to drummer TJ Fairfax, the track becomes a plodding harbinger of doom, drama kept aloft by a heavy guitar riff.

Then the drums disappear, replaced on “With Wearied Eyes” by a smoke machine of tonal drone.  The music is perfect for the oncoming season, when darkness begins to encroach, driving people inside like ranchers herding sheep.  The percussive explosion of “To the Ashes” implies that safety may be absent inside as well.  Emotional darkness has no preference for location.  Does Knox intend for his music to sound this bleak?  We suspect the answer is yes, as the cultic cover implies sacrifice, suggestive of an occult ward and the Tarot’s Hanged Man.  But just as the Hanged Man, Ceremony in the Stillness also points toward the possibility of transformation.  The saxophone, ondes Martenot and cello offer a greater degree of depth and prompt a reassessment of the entire project.

Concluding track “Remembrancer” unfolds in three parts and breaks the mold of what we have come to expect not only from A-Sun Amissa, but from the entire album.  The first third unfolds as expected with strumming, drones and a general sense of unease.  Throughout the album, drums have appeared in every other track.  But at 3:24, the track surges to a higher level as all the instruments come out to play.  The tone is one of soft triumph.  A minute later, the song seems about to end, but instead, the strings take center stage, dispelling darkness and replacing it, if not with light, at least with spiritual illumination.  The byproduct of the struggle is an incredible sweetness, which overcomes the odds to have the final word.  Finally there is stillness.  The heart is at rest.  (Richard Allen)