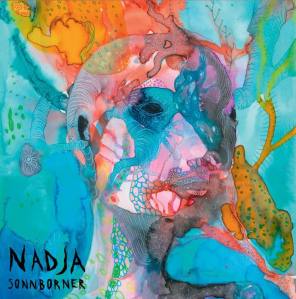 Interconnection is a common theme to Italian artist Le Nevralgie Constanti (Mirko Rossi, translated as “The Constant Neuralgia”), whose work is featured in Nadja’s Sonnborner. It is not the simple interconnectedness of which so many a New Age perspective dwells upon, but one in which a transmutation of suffering and happiness occurs, the beauty of life not a singular experience but a multiple one in which intensity is crossed by even the smallest fragments of living. Constanti’s images let color and shapes flow indistinctly from bodies into the backgrounds, a mitochondrial processing of energy that dissolves the form of the human into that of nerves and the tendrils of plants, a cellular convergence in which emotions flow like sunrays. Sonnborner, divided clearly into two sections, brings Nadja (Aidan Baker and Leah Buckareff) and string players Julia Kent, Agathe Max and Simon Goff together to create a stream of energy in which beauty itself is a source of harshness.

The sun, after all, which makes possible our life on Earth, will also ultimately put an end to it (if we don’t do it first, at least). The title track, composed of two sections (“Sonnborner” and “Aten”), begins slowly with a soft dirge around which the strings swirl as Baker’s voice soothingly builds up a melancholic mood. Soon enough, the guitar overtakes the singing in a more defined fashion, dispelling the haze while the strings coalesce into drones. By the time the heaviness sets in at around the 9-minute mark, the voice comes back, like a haunting, contrasting deeply with the low, grave rumble of the doom riffs. The piece builds up into a storm, the sun shining brightly into a world of electric, echoing drones, their crackle and noise a chaotic counterpoint to the sustained tones of the strings. The piece shifts into “Aten” about 17 minutes in, instilling a sense of stasis, the light washing over a life no longer at the peak of activity, a long-duration moment of distancing from the bustle of cells in order to look at the million-years processes of mountains. The structure of “Aten” mirrors, in many ways, that of “Sonnborner”, its eternal drones engulfing the serenely melancholic riffs of strings, a beauty no more the result of movement but of its deadly opposite in near-stillness.

Just when the band is settling down for eternal rest, “In the Shadow Of the Wing Of the Thing Too Big to Be Seen” bursts forth, fully armed and armored to the teeth, bearing the torch of the sun’s monstrosity in a style previously only explored in 2014’s Tangled, “grindgaze”. Like its name implies, it’s as fast as Nadja have ever gone, as traditionally ‘metal’ as they’ve ever sounded, a punishing sound wrapped in reverb. The relative peacefulness of the first part of the album is here utterly scorched, the sun no longer an engine of production but now of absolute consumption, ‘too big to be seen’, the sun that does not warm the skin but burns it, the sun that does not calm the eyes but blinds them. The transition is merciless, and the pace does not slow down till “Sunborn (Coda)”. It is a bright doom piece in Nadja’s more recognizable style, peaceful and melancholic, a birth from the sun a natural occurrence of a life that is also bearer of fiery death. Like in Constanti’s art, the colors and the shapes, the emotions and the thoughts flow indistinctly from inside to outside and vice versa, happiness and suffering intertwining in the very movements of each cell. (David Murrieta Flores)