Tired of hearing the same old stuff?  The fall experimental schedule includes a collection of unearthed Soviet treasures, a boxed set of field recordings, a debut album of gothic theremin, art books, free jazz, improvisation and an industrial opera.  Originals abound.  There’s something here for every taste.  On the flip side, this is the place to go when a friend says they “like every kind of music.”  We’re betting they don’t.  On the other hand, their minds may be blown and their horizons expanded.

Rich’s Pick: Various Artists ~ Metaphonics (Temporary Residence, September 21)
This limited edition 7-LP set is the one to beat this season, arriving in a carrying case along with a hardbound book.  The music is based on field recordings from Stuart Hyatt and has interpretations from Eluvium, Gazelle Twin, Kaitlyn Aurelia Smith, Loscil, Matmos, Mary Lattimore, Lullatone, Marcus Fischer, Rafael Anton Irisarri and many more.  The book includes essays by a wide range of contributors and an introduction by sound ecologist Bernie Krause.  Temporary Residence is only pressing 225 copies and I’ve reserved one of them, so if you want one of the others, act now!

Philip Sulidae‘s new Hemisphäreの空虚 label is set to release its second trio of tapes on September 21.  Andrea Borghi‘s Superelief is a bubbling electroacoustic set that features turntable and “playable casts of various surfaces.”  Phil Maguire‘s Folamh, Endless may be one of the quietest things you’ve ever heard.  The tracks include “Music for Blank Cassette No. 1 and 2,” which evoke the spirit of “4 33.”  And Sulidae’s own Petrification and Stride melds found objects, metal and cardboard, evoking a spirit of playfulness.  Percussionist Eli Keszler expands his sonic palette on Flying Floor for U.S. Airwaves, incorporating field recordings, keyboards, brass and strings; yet despite what one might guess, the end result remains subtle (Shelter Press, mid-October).  Also on Shelter Press, Thomas Ankersmit delivers an Homage to Dick Raajimakers, filled with cassette experiments, contact mics and sonic exploration (mid-September).  Fragment Factory’s Spinhouse is an installation-based work from Anna Schimkat.  The multi-media artist tackles the Brexit vote on one track and the sounds of an office building on the other (September 1).  The roughly self-titled cassette from la plimbare (Diana Voinea) is the score to a fading summer and a way of life in a small town on the Black Sea (ACR, September 10).  Spoken word, field recordings and snatches of music form the sonic scrapbook of Joachim Badenhorst‘s Typhoon Days, an homage to the public library of Antwerp (KLEIN, September 1).  The Composer Built label can be proud of Sound and Stone, a celebration of the sound stones of Hannes and Klaus Fessmann.  Featuring sonic experiments by Machinefabriek, Leyland Kirby, Paul Jebanasam and more, the tape is bound to be an object of conversation, as it comes with its own stone sample pack (October 26).

Ana de Silva & Phew began collaborating through file exchange, and the practice yielded such promising results that it became an album.  Island is filled with subtle electronics, engaging textures and bilingual experiments.  The album serves as a reaction to the current political climate and a sign of hope (shouting out loud!, September 28).  Earlier this year, Andrea Taeggi released an exploration of the sonic properties of piano innards.  Now he’s turned his attention to vintage analog instruments, including a flight simulator.  Zimní Král is released September 1 on SM-LL.  Taking up the experiments of Taeggi, Andrea Neumann | Mads Emil Nielsen present Refound, a study in electronics and “inside piano,” available as a 10″ record on Arbitrary (September 28).  The high pitched frequencies of Kaori Suzuki may startle listeners at first, but stay tuned.  The single-track Conduit plays with expectations of melody and harmony, and turns out to be incredibly unified (Second Editions, September 7).  The “controlled eruptions” found on Bob Bellarue‘s music of liberation are signs of his industrial roots, and serve as an homage to collaborator Z’EV, who passed away as the album was nearing completion (Elevator Bath, September 14).  Meanwhile, Klara Lewis & Simon Fischer offer a remarkable series of contrasts on Care (Editions Mego, September 28).  Stutter, birdsong and drone all find a place to hang their hats.  Some may know Lewis as the daughter of a famous experimental composer, but she deserves to be heard in her own right.

Continuing the collaboration theme, Ilia Belorukov, Miguel A. Garcia and Alfredo Costa Monteiro team up on Etwas, a set of compositions for electronics and flutophone (Tanuki Records, September 4).  Lars Graugaard | Grup Instrumental de València are returning this September with Engage and Share (Kairos).  Anders Vestergaard and Finn Loxbo present dissonant plucking and soft electronics on I’m fine with the swirling colors, set to appear September 13 on Gikt Records.  Toshi Wada joins his father Yoshi Wada and friends on Neu, the 14th installment of RVNG’s FRKWYS series.  The first taste arrives in a kaleidoscopic video by Jana Papenbroock (September 28).  Also on RVNG we find the new album from Oliver Coates, on which cello takes a back seat to electronics and traditional composition to hexadecimal notation.  Shelly’s On Zenn-La is released September 7.  Samples of a care home find their way into Two Rooms, an electro-acoustic tape from Klon Dump on NoCorner (September 7).  One of the season’s longest titles comes from Kammerflimmer Kollektief, who are set to release There are actions which we have neglected and which never cease to call us on Bureau B.  The album switches between genres with aplomb and is yet another sign of the ensemble’s ageless appeal (September 21). 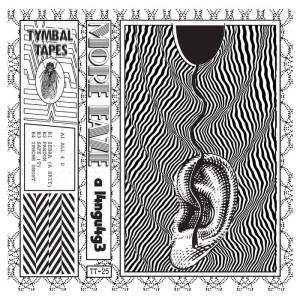 The September Batch from Lincoln, Nebraska’s Tymbal Tapes dances between genres, so we’re listing all four here.  More Eaze‘s 14ngu4g3 contains opera, piano, TV ads and some miscellaneous music, all caught in a light whirlwind.  MAbH‘s cinjusti is more sedate, with waves of ambient and drone, but roughs up the mix with field recordings and tape samples.  Endurance uses loops and microsound to create a disorienting ambient effect on Celestial Governors.  And Budokhan Boys presents five mangled pop songs on That’s How You Become a Clown; you won’t hear these tunes on the radio.  The cassette covers are black and white, but form a unified, intricate template, a sample of which can be seen to the left (September 1).  Scroll through the TT site to find 21 prior releases.

Bang on the Can’s Ken Thomson leads the Sextet on a new album that begins with Ligetti and continues with Thomson originals.  The album is brass-heavy with trumpet, trombone, and sax, and is out September 7 on New Focus.  Andrew Bernstein‘s An Exploded View of Time sees the saxophonist engaging the listener in real time, demonstrating a talent for breath control (Hausu Mountain, September 28).  Clarinet, bass and Buchla are only a few of the instruments featured on Bird Saw Buchla, from Rothenberg/Hein/Tammen.  Readers will recognize Rothenberg from his books on the music of birds and bees (Clang, September 14).  Label Astral Spirits will release four albums on September 21.  Crazy Bread‘s Vocoder Divorce is comprised of guitar and tape deck explorations, courtesy of Ryley Walker and Max Allison (also known as Mukqs); Brandon Seabrook Trio‘s Convulsionaries attempts to “turn doom into catharsis;” East of the Valley Blues‘ Reassemblera honors the sound of John Fahey; and Brandon Lopez’ quoniam facta sum villis turns Bach cello suites into bass.  A New Wave of Jazz counters with three Tonus albums, each featuring different lineups.  Intermediate Obscurities I+IV is a performance recording built around a piano motif; Texture Point is a minimalistic set that honors its title; and Cagean Morphology is a single pointillist statement.  All are released on October 5.  The music of Ariva Endean is often sparse, but there’s a reason; the clarinetist practices “holicipation,” a style of “playing for oneself.”  cinder : ember : ashes is out October 19 on SOFA.  Booker Stardrum may sound like the name of a glam band, but it’s actually a percussionist.  Temporary etc. shatters preconceptions with non-linear constructions and electronic enhancements (NNA Tapes, October 26).  No stranger to long songs, Dressed in Wires presents six improvised rock tracks in 80 minutes on Piss Wires Volume ii: The Arrangements while promising five releases to follow in five months, which makes the name of their label oddly fitting (Bear With Me Records, September 14).  Golden Oriole follows a similar template on its self-titled, half-hour, two track album, filled with energetic jamming, due October 7 on Drid Machine.  Per Anders Store presents the performance album Live fa Grense Jakobselv on October 1, playing all the instruments himself.  In contrast, the largest group in our preview is the twenty-eight-strong Wet Ink Ensemble, who bring the work of multiple avant-garde composers to life on Wet Ink: 20 (Carrier Records, September 15). 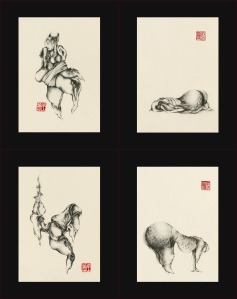 Audrey Chen has played cello on many of our favorite albums over the years, so it’s a surprise to hear her vocal experiments on Runt Vigor.  The artist remains relevant by continuing to catch us off guard (Karlrecords, September 21).  More aggressive vocal treatments can be found on Derek Piotr‘s Grunt, in which the human aspect is often virtually unrecognizable, chopped and stuttered by vicious electronics (DPSR, September 28).  Colin Self‘s Siblings is part six of an electronic opera that debuted at MOMA; the studio version includes dance beats and masticated voice (RVNG, October 26).  Céli Lee and 無 (MU) are about to release 變形記 – A Journal of Transform, an unusual album paired with Lee’s even more unusual drawings, pictured right.  Each composition starts in an accessible fashion before finding its own path (Entertaining Violence, September 3).  Babe, Terror mixes sampling, backwards masking, turntablist trickery, and musique concrete; Fadechase Marathon is out September 28 on Glue Moon.  With so many new theremin albums on the market, it’s hard to tell which to choose.  Just kidding, there’s only one: Hekla‘s Á. Not only is it a great way to experience the instrument, it also adds something new to the conversation.  Directed by Logi Hilmarsson, the latest video is a visual tribute to classic fantasy films and an aural glance forward (Phantom Limb, September 14).

We’ve already reviewed Notes from the Underground: Experimental Sounds Behind the Iron Curtain, and we may have jumped the gun a bit as the album won’t be out until September 28.  But since these songs were recorded in the 70s and 80s, we felt it was fair.  The compilation crosses multiple genres while shining a light on a bevy of underground artists, many of whom never got their due (Iron Curtain Radio).  Ele Ypsis is one of the most distinctive duos around, combining a gothic sensibility with operatic vocals and industrial/IDM rhythms.  The drama is over the top on Linga Dei, which sounds like a cross between Carl Orff, Apotheosis’ club version of “O Fortuna,” E Nomine and the wilder excursions of WEG (September 21).  Not for the squeamish is Rudolf Eb.er‘s 31-track Om Kult: Ritual Practice of Conscious Dying – Volume I.  But of course most people would glean that from the title.  Sounds include maggots, monks and grunts, so put this puppy on your Halloween list (Schimpfluch Associates, September 1).