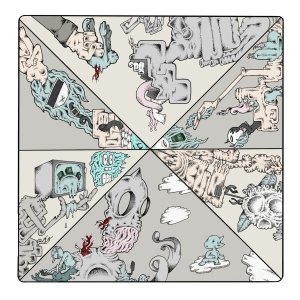 The little ghost from the band’s self-titled debut may be gone, but it’s been replaced by a host of new terrors, portrayed in the Crumb-like cover design from Aaron Guadamuz: drugs, mass media, scornful adults.  Inside the disc are other images, hordes of monsters seeking to break into a suburban house, unaware that an early monster has gotten there before them.  This is the land of Father Howl, in which children have to fight and tumble to survive; or so it seems.  The trio writes of “imaginary terrors,” of which there are many, albeit unnecessary in a world of legitimate fears.  And so as the brief introductory track “The Lost Dream” fades into the assault of “Subtotal,” one thinks of innocence lost, in this case shredded, fuzzed guitar taking up the lead when the melodic guitar exits.  But then there’s a curve ball: an acoustic breakdown reminiscent of Ten Years After’s “I’d Love to Change the World” ~ perhaps intentional given the secondary theme of nostalgia.  When a music box appears at the end, it’s as if to highlight the way in which we exaggerate our fears when we’re young and our former happiness when we’re old.  In reality, our childhoods were seldom that bad or that good.

“Nowhere on Earth….is Safe” is a foreboding title that amplifies both a child’s paranoia and an adult’s sense of helplessness.  But is it true?  Father Howl creates a slow burn of drums and bass for the guitars to nest in.  It’s safe for the guitar, so why can’t it be safe for us?  The point is not that we are unsafe, but that we think we are unsafe.  (For an articulate discussion of real-life statistics, we refer you to Hans Rosling’s Factfulness).  A bit of metal sneaks into this track like one of the monsters on the cover, providing one final scare at the end (“It’s over!  No, wait, it’s not over.  Now it’s over.  Or is it?”)

The band remains energetic throughout the album, the best distillation of its sound found in the two-minute “Sidescroller.”  It’s not that they’re fiddling while Rome burns, but releasing the tension that would cause Rome to burn.  With flames raging across the band’s native California, this is a perfect time to share such creative fire.  (Richard Allen)