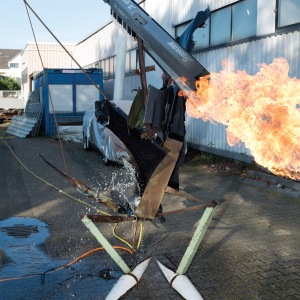 Tim Hecker‘s Virgins was our #1 album of 2013, while 2016’s Love Streams was never picked up for review ~ the tonal differences were so great that they caught our reviewers off guard.  We missed the abrasion, the jutting edges, the jagged wrecks of sound.  This year, Hecker is back to doing what we love.  We’re even re-visiting our initial reaction to Love Streams, asking ourselves if we had been too harsh in hoping for harshness.  After all, the composer had admitted that he had grown tired of repeating himself.

Konoyo is certainly no repetition.  Not only is it vastly different from Love Streams, it bleeds different timbres than Virgins.  The veneer of beauty remains while the sense of danger returns ~ in the very first second.  The opener launches with descending glissandos, like an alarm, setting the tone for the entire album.  But if the album can be defined by a single variable, it would have to be the presence of gagaku ensemble Tokyo Gakuso, playing instruments such as shō, ryuteki and hichirik.  These sessions were recorded in a temple, lending the music a spiritual veneer, even if the impression is one of faith on the edge of collapse.

One of Hecker’s many strengths is his ability to take raw material ~ passages of music or even entire songs ~ and to play with the components, dissecting, reassembling, layering, occasionally shoving round pegs into square holes.  We recognize the end product as drone, because of its sustained tones, although the influence of modern composition is crucial as well.  “This life” builds into a miasma, then secedes, leaving the impression of a popped balloon before the pieces hit the ground.  There’s sadness attached to this switch in viscosity, reflecting the overall theme of “ritual and regret.”  The old ways no longer serve us, but we haven’t found effective new ways.  Despite its mournful nature, Konoyo serves as a metaphor for the way forward, the composer continually re-inventing himself, creating during a time of cultural disintegration.

There’s a lot going on in the cover photo ~ fire, water, wreckage, but also symmetry.  The album looks like it sounds, or the other way around.  Moments of tranquility allow the listener to reflect between developments, the best examples being the tender “Is a rose pedal of the dying crimson light” and the orchestral finale of “In mother earth phase.”  The outer drama comes and goes in waves, while the claustrophobic atmosphere accumulates.  The songs grow longer and longer: an eight-minute track, a nine-minute track, a ten-minute track, finally a quarter-hour piece to close the set.  The more time one spends in Hecker’s world, the more the sessions expand.  It’s as if the artist is inviting the listener to acclimate to a longer the attention span.  Time is received differently in western and eastern cultures, the latter more attuned to the moment, as Hecker experienced during his trips to Tokyo.  The title is translated “the world over here,” but as the composer brings the music home, “here” simultaneously becomes “here” and “there,” representing a fluidity of cultures rather than a series of borders.  In the end, the only ocean between us is one of sound, which we cross on a ferry of notes.  (Richard Allen)