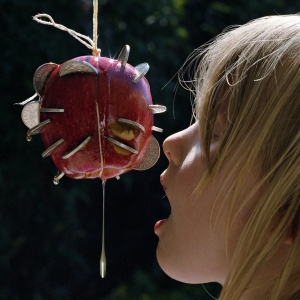 Copenhagen’s Puce Mary makes her first showing on our site with her best album to date.  Torbjørn Rødland’s striking cover imagery is reminiscent of Kirk Weddle’s work on Nirvana’s Nevermind. The comparison is even more apt when one links Frederikke Hoffmeier and Kurt Cobain as confrontational innovators.

While this has been the year of the #MeToo movement, there’s more to women than their interactions with men.  Puce Mary may use her voice to speak, or shove harsh industrial soundscapes to the frontline, but remains in control at all times.  The opening diptych of “Dissolve” and “A Feast Before the Drought” sets the stage for an emotional onslaught, a battle between technology and the heart, temptation and innocence, commerce and the soul.  Hoffmeier names “psychological famine” as the impetus for the album: skinned dryness, parched compassion.  The album is an attempt to recover health through unflinching self-examination, every weakness and vulnerability exposed until the flaying seems like strength. 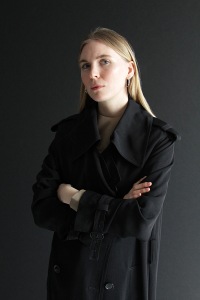 This is not a gentle album.  The surface horror of “To Possess Is To Be In Control” is reminiscent of the darker excursions of spoken word artist Jane Amara Ross, while the music draws comparison to Gazelle Twin, whose own album Pastoral was released 21 September.  In its loudest, most abrasive form, industrial music has always contained incredible power, and Puce Mary taps into this power as if it were a jackhammer welded to a hand saw.  “Red Desert” lays it all out:  I’ve been tortured by a feeling of drowning under you, under society, politics, the decay of nature, my lack of interest … and I feel desperate.  So many of us feel this way, but lack the vocabulary or courage to speak it out loud.  As modern as the foreground music may be, the presence of an organ in the background is a reminder of old, failed ways.  A late line is especially chilling:  to hear a human voice and trust that it comes from a human who was made like me …  The rise of technology, in particular speech synthesis and deep neural networks, has caused us to doubt what we see and hear.  Westworld may already be here.

With a screech and a roar, Puce Mary has produced the weapons of resistance.  She never seems angry, despite the cogs and gears; instead, she sounds determined.  She doesn’t simply take the tools from her oppressors; she wears them.  The result is less a reaction than a declaration, a greasier, grimier version of “This Is Me.”  Nobody washed this music off.  Nobody cut out the rotten parts or sloughed off the rough edges.  There’s no artifice here, no makeup, no forgiving lights.  The Drought is raw, exposed, festering and bright, a re-definition of beauty that seeks no outer validation.  (Richard Allen)