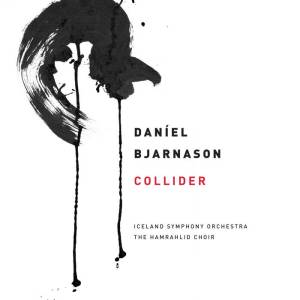 We’ve been fans of Daniel Bjarnason from the start, and with each new release, he’s continued to cement our initial reaction.  Collider is a spectacular album, collecting compositions from the artist’s “American period,” initially written for ensembles in Cincinnati and Los Angeles and performed here by the Icelandic Symphony Orchestra, also conducted by Bjarnason. Reykjavik’s Harpa yields remarkable acoustics, best reflected at home with the volume turned high.  Rife with density, dynamic contrast and tonal variation, Collider reveals new pleasures at every turn.

The entry point is the 11-minute “Blow Bright.”  In form, the piece is described as “variations on a repeating bass pattern,” but in execution, it’s a whirlwind of motion, with brief starts and quick stops, dancing percussion, assertive brass and emotive strings.  Despite its bombastic nature, the composition peels back its own skin to expose the song of the solo violin, plaintive and desperate.  The imagination drifts to modern dance as one imagines a single dancer attempting to stretch the boundaries of the stage, reaching out again and again, breaking the plane with her hands but not with her feet.  And then the world comes rushing back in, jostling, swirling, even pounding.  Then sweetness seeps over the orchestra, led by celestial, descending strings, intent on rescue.  The frenetic finale implies that while the dangers remain with us, we no longer face them alone.

The quarter-hour title track represents a different approach, its slow-growing atmospheres more Solaris than Processions.  But grow it does, doubling its volume before a light implosion.  The pas-de-deux between restrained and unleashed provides the piece with its greatest tension.  Massive blasts punctuate the field like land mines.  The title is well-suited to the material.  Again the composition darts to a massive finale, smashing into walls, picking itself up, trying others directions and finally breaking through.

In the center we find the three-part “The Isle Is Full of Noises,” which comes with a surprising near-apology in the liner notes for the fact that The Tempest has been covered so much.  It’s like suggesting that all preachers should fall silent because there’s no life left in the texts.  Shakespeare’s canon is as close as we come to scripture on a fictional front, and this reading, graced by the Hamrahlid Choir, is sublime.  One can sense the tempest, even if unfamiliar with Caliban and the island.  The approaching conflict is signaled by gathering chords and rising scales.  Bjarnason mirrors the Bard by “covering” not his full script, but the depth and wealth of its emotion.

Collider is one of the best orchestral albums of the year, by one of the world’s finest composers.  The album’s only flaw ~ it’s a digital release.  We’ll never be able to hold it in our hands, to flip the vinyl, feel the depth of the music as it is released from the grooves.  William Robin’s excellent notes can be read here with one benign pop-up ad.  We implore Bedroom Community to press this on CD and/or vinyl!  In the meantime, watch, listen and purchase below.