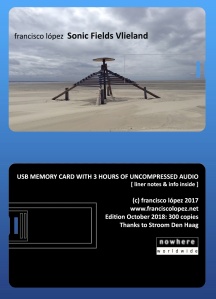 Field recordings often capture sonic environments so that they can be shared with others across the globe.  In its current form as a USB memory card, Sonic Fields Vlieland is now one of these; but it began as something even more site-specific.  Visitors to the tiny Dutch isle of Vlieland were invited to hike from the village (there’s only one village) to six specific locations throughout the island, where they were able to hear these compositions on (free) headphones.  After receiving the card, I resisted the temptation to play these pieces on my stereo, and was glad I chose the headphone option.  These are not car tracks or speaker tracks; they merit one’s full attention and reward it with nuance and depth.

While listening to “forest dip,” the first sonic observation is that these recordings are pure, yet layered.  Few sonic environments morph as quickly as this, even at a brisk pace.  Lopez seems to have captured the finest frequencies, editing them to form representative compositions that the everyday hiker might not encounter on any given day ~ only on a series of days.  The sudden bird cry twelve minutes in is a revelation of nature’s power to surprise, if only one will sit still long enough to let it happen.  The richness of “forest hill” reveals itself through running water and something that sounds like deep bass (but is clearly environmental).  At 10:32, the low frequency takes a break for nearly a full minute, exposing the environment’s subtler sounds.  The listener seems to be approaching a waterfall, but at the quarter-hour mark everything shifts.  Two minutes later, the water sounds return with footsteps and splashes, perhaps an invitation for the hiker to wade or skip stones.  In the 21st minute, the composition switches to a cavernous drone.

We’re already interested in visiting Vlieland, a 12-kilometer island with few cars, home to only 1100 humans, but many more birds.  The “dune crater” is packed with avian conversation, marred only by the sound of a motor (helicopter, drone?), a reminder of the battle between nature and commerce.  On Vlieland, for the most part, nature is in the lead.  Even the tourism page extends the invitation to “surf in peace.”  No drop-ins here!  And yes, there are occasionally waves in the 6-8 foot range.  On “beach,” they sound even larger and louder, an exciting cacophony of sea and wind.  To listen is to be caught in a great storm offshore, thrashed and tumbled in the surf, unaware of which end is up, gasping for air, with only brief respites (the first at 7:32).  In the 22nd minute, the listener is plunged underwater.  To listen to this composition on the actual Vlieland beach must be an incredible experience, although a bit disorienting if on a day with flat surf!  One reads of “interesting things” that wash up on shore, hopefully not the remnants of overly brave tourists.  The finest segment begins in the 13th minute, as the sound of lapping waves comes to the foreground; the stereo effects here are particularly effective.

The hardest part of the island to reach is the west end, intended “for the truly adventurous hikers-listeners.”  López saves the longest part of the presentation ~ one of its three hours ~ for this.  “west end” begins with quiet noises, like those at the mouth of a cave.  Eventually a gong is introduced, a reflection of the journey’s spiritual nature.  By the midway point, the gong has been dislodged by a repeating boom; the feeling of safety is replaced by the feeling that one is approaching Skull Island.  Drone elements (one like a ticker tape) add tension that dissipates only in the final third, dipping in the 38th minute and again in the 46th.  While we don’t suspect that Vlieland is this dangerous, we do suspect that it is this exciting: an adventure that one is invited to share at home, or perhaps on one’s next vacation.  Sonic Fields Vlieland is a standout among Lopez’ hundreds of ventures: generous and resonant, a mystery in a card, an invitation to explore.  (Richard Allen)

Available here (as well as from other sources; simply Google to find!)