Laibach ~ The Sound of Music 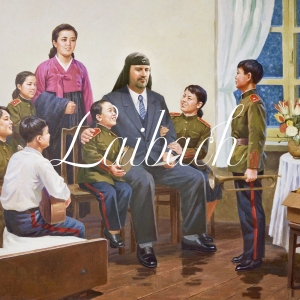 By now, you probably know this album’s story: avant-garde collective Laibach go to North Korea in 2015 and become the first Western band to play there ever since the country split in two. What they play is a variation on their regular praxis: The Sound of Music, the soundtrack of a movie which is apparently most commonly used in North Korea as a resource to learn the English language. What is at stake here, as in pretty much all of Laibach’s work, is the idea of an essence in the political aesthetic of any and all media: appropriation is the tool with which to return materiality (and plasticity) to said aesthetic. In this case, a narrative of exile from totalitarianism, accompanied by an equation of musicality and peace with the true nature of the Austrian landscape, becomes the starting point for an insertion into the trappings of other oppressions not so distant in kind and quality from the ones that are being opposed. Whether it’s the disturbingly dark rendition of “Sixteen Going on Seventeen” or the sheer threat of the phrase “Bless my homeland forever” from the “Edelweiss” ballad, the conventional positivity of their image is laid bare as a horror lurking at the edges of sunrays, simply a shiny mirror of endless, terrible night.

The form of that appropriation is here relatively subtle in comparison to the industrialized, military-march variations of Laibach’s best-known works, aptly reflected by the Valnoir socialist realist album cover. The heroic domesticity of the scene is quietly subverted by both the uniformity of the children and the out-of-placeness of Laibach singer Milan Fras at the center, his generic Western-ness flipping a coin between being unique and being a stand-in for the idea that this is how our contemporary authoritarians look like. He fits perfectly, and yet he doesn’t: that’s the core of many a Laibach project, up to and including this one. After all, how has the original, purportedly anti-authoritarian movie been utilized in an authoritarian context? The girls’ choir present in “Lonely Goatherd”, as well as its pop re-structuring, offer a hint: re-envisioning the movie as a pedagogical tool openly fulfills the purpose that it has for more than fifty years inherently fulfilled and yet obscured… as a mere piece of propaganda. The Sound of Music reveals what was already there but we’ve refused to see (just look at the video of the aforementioned track, below). Like Fras emphasizing the word “hate” in “So Long, Farewell”, what seems at first an innocent lullaby turns smoothly into a weirdly powerful hyper-nationalistic hymn, with the children’s choir following along, like so many a school Monday in different countries all across the West.

The band doesn’t lose the opportunity, however, to do their thing with North Korean pieces of popular culture, and the album closes with “Arirang” and “The Sound of Gayageum”, which take folk music to process it through the aesthetic lens of an exaggerated socialist realism. The result is exemplary kitsch, the kind of songs you’d imagine you’d hear late in the 1980s in Soviet radio, modernity deviated, another route to the failed promises of a better future the entire world is quite familiar with by now. The very last track, Laibach’s “Welcome Speech” to the concert, shows their tactical hand – inversion as a means of provocation and revelation. What we thought was the essence of The Sound of Music (just like we thought about the essence of, say, “Across the Universe” or “Live is Life”) flips over to reveal a horror not too dissimilar from the one it is supposed to fight; the appropriations of Korean folk muddle the ‘isolation’ of the country to show how it, too, withholds the Western horrors it opposes. “How do you solve a problem like Korea?”, Laibach parodically sing, but the question is framed in terms of an abusive relationship, the following line of the lyrics, “How do you catch a cloud and pin it down?” underlined as the erotically violent thoughts of a hyper-masculine figure. The question, in short, reveals a lot more about us than its initial posing seems to present: we are often unwilling participants in the spread of authoritarian thinking.

Perhaps with very apt timing, Laibach once again throw to any and all listeners the question once raised by Walter Benjamin when he wrote a text expressly dedicated to develop ideas and arguments that could not be used by fascism. When Laibach runs out of material to appropriate, that’ll be when their job is done, but it doesn’t seem like that horizon is close at all, in fact, it is moving rapidly farther away. The question, then, dear readers, is precisely that: how do we create, how do we express, how do we do things that cannot be used for the purposes of authoritarianism and fascism? Or, to crassly divert the way in which Laibach put it: how do you solve a problem like Hungary, Brazil, the United States, Ukraine, the Philippines, Venezuela, Turkey, India, Italy, Thailand, Poland, Guatemala, Russia, Saudi Arabia, the streets of Mexico, China, and so, so on? We might not manage it in time for the world to become a better place, but I do think that we should at least try. (David Murrieta Flores)