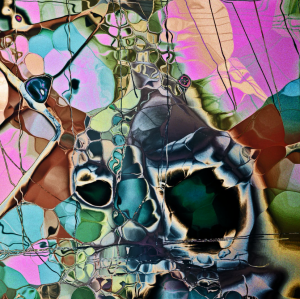 The last album from MYMK (Brasília’s Bruno Sres) was encased in concrete.  Early editions of the new album come with a second disc ~ a visual album from Yoshi Sodeoka.  These additions make the releases unique.  But the best thing about MYMK is his music needs no adornment; the bonuses are simply icing on the cake.

If there’s a corollary to MYMK’s music, it might be found in the work of Sculpture, another electronic artist with a visual bent.  Each disregards traditional rules of tempo, beat and accessibility, making fascinating music as a result.  As an opener, “Mother Dear” is an attention-grabber, but it’s not catchy.  Sres is more interested in the possibilities of percussion.  “Mother Dear” sounds like an amplified closet filled with hangers bending and falling.  MYMK isn’t trying to lead his listeners to dance (although it’s possible ~ “Vestal” has a pretty good beat and something resembling a melody).  But his aural paintings provide food for thought.  It’s no wonder Sodeoka finds his work inspiring. 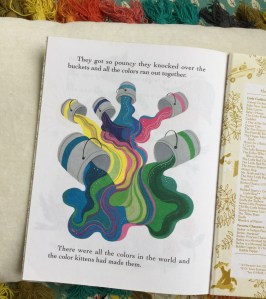 At first, the videos may remind viewers of X-Mix, but the coordination between sound and image is more on point here.  Lines and colors converge, diverge and disintegrate along with these pings and popcorn pops.  The colors are spectacular, reminiscent at times of soap bubbles in the sun or the spilled paint on the last page of Margaret Wise Brown’s children’s book The Color Kittens.  Sodeoka hears the color in these compositions and translates them into synesthesia.

Not everything is percussive.  The deep drone of “Bonfires” hearkens back to The Memory Fog, reflected in creeping turquoise, teal and aqua.  Along with “If You Summon” and “Into Promenade,” it’s probably the best video here, although it’s difficult to measure this sort of beauty.  Until they burst, the “pure” circles of the latter conjure associations with the backgrounds of “Into the Spider-Verse,” a hit film that has surprised moviegoers by expanding their visual horizons.

But what’s the best track?  We’re going to go with an outlier, as “Suntalk” shakes up everything we thought we knew about MYMK.  The track is subtle, as soft repetitions of gongs produce a feeling of inner peace: a stark contrast to all that has come before (albeit prefaced in part by “A Garden Pond”). “Suntalk” allows us to appreciate the artist’s range, preventing us from pigeonholing his sound.  We prefer this track only without the video, as the undercurrent is one of focus rather than distraction.  We’ve referred to MYMK as drone, electronic and experimental, but here it would be fair to call him ambient, spreading his sounds like Sodeoka’s spilled paint.  Garlands are decorations we associate with victories; Garlands is one of them.  (Richard Allen)